When we talk about Vikings, we often focus on Western Europe. However, the Swedes were very active in Eastern Europe . Ahmad Ibn Fadlan’s chronicle, which we will discuss in this article, is proof of this.

By the time this Abbasid made his famous journey, the Vikings had already had contact with Muslims both in the form of looting and through trade . The Swedes traced Russian rivers from the Baltic, reaching the Black Sea and the Caspian and negotiating with Christian Constantinople and Muslim Baghdad.

The Vikings sold furs, slaves, and swords in this eastern area. And, to a lesser extent, they also exported honey, wax and amber. They established Kiev and Novgorod as trading posts and plundered the Caspian Sea area.

Who was Ibn Fadlan?

Ahmad ibn Fadlan was a 10th century Muslim traveler and diplomat in the service of the Abbasid Caliphate. He went down in history thanks to the chronicle of a trip he made in the Volga area, where he met some Vikings. His bias-free , almost anthropological descriptions reflect cultural aspects such as clothing or religious rites.

Specifically, Ahmad Ibn Fadlan was sent by the Caliph Al-Muqtádir to negotiate an alliance with the Volga Bulgarians . Bolghar or Volga Bulgaria was a state located between the Volga and Kama rivers. It was a strategic position where the trade routes of the Vikings from the north and the Arabs from the south converged.

The journey of Ahmad Ibn Fadlan

Ibn Fadlan left Baghdad on June 21, 921 . The thriving Abbasid capital was one of the most prosperous cities in the world and the Caliphate one of the most powerful kingdoms of its time. For this reason the king of Bolghar had asked the Caliph Al-Muqtádir for help to place himself under his protection against the attacks of the Khazars.

Ibn Fadlan’s mission was to persuade the Bulgarian king, who had announced his conversion to Islam, to pay homage to the Abbasid caliph. In return, the Baghdad embassy would provide a substantial amount of money to the Volga Bulgarians to build a mosque and fortress.

Over the course of nearly a year, the Arab emissary traveled 5,000 kilometers to reach Bolghar (on the banks of the Volga, in present-day Russia). Along the way he met various peoples whose customs he was describing . Samanids, Corasms, Oguz Turks, Volga Bulgars, and finally Vikings and Russians. He also had the opportunity to see the Northern Lights and discover the White Nights. 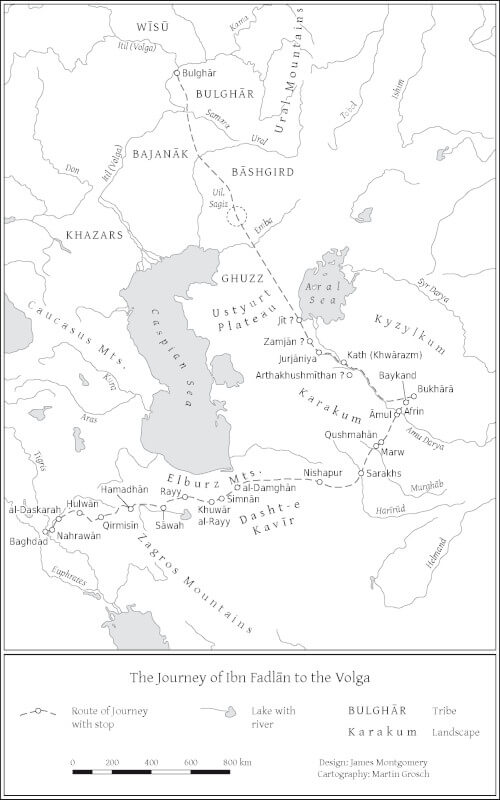 Ibn Fadlan’s journey from Baghdad to Bolghar, where he met the men of Rus

Living with the men of Rus

While Ibn Fadlan was in Bolghar in 922, a group of Viking merchants arrived in the city. The Muslim diplomat had the opportunity to learn about the customs of these Nordics . How they dressed, how they worshiped wooden idols, how they had sex openly with their slaves, etc.

In contrast to many of the peoples he encounters on his journey, the traveler praises the appearance of the Vikings with these words “I have never seen more perfect bodies than theirs. They were like palm trees. Blond and ruddy. This is not the only thing that drew his attention to his appearance: “from tip of toe to neck, every man is tattooed in dark green with designs”.

Of course Ibn Fadlan condemns their absolute lack of hygiene, calling them “the dirtiest creatures of God” . The Rus’ men encountered by this Abbasid did not wash themselves after eating or defecating. Furthermore, his only habit of cleaning was terribly unhealthy: the boss washed his face and head in a large bowl of water, blew his nose and spat into the basin; soon after, the same bowl was passed to another person, who did the same actions, and so it passed from hand to hand without even changing the water.

By far the most important event Ibn Fadlan had the opportunity to attend was the funeral of a Viking nobleman . The diplomat relates how one of his slaves offered to die with his master. People close to the deceased had sexual intercourse with the servant, who was then sacrificed and laid with her master on a ship that was set on fire. 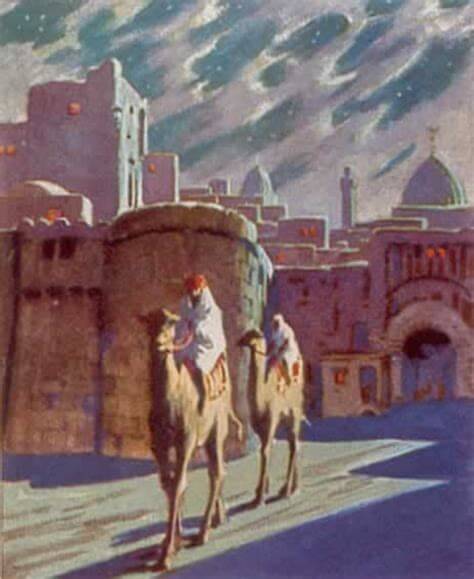 The legacy of Ibn Fadlan’s tale

Reading this 10th-century chronicle inspired Michael Crichton to write his bestselling novel  Eaters of Corpses (1976). Years later, his book was brought to the big screen with the film The 13th Warrior,  starring Antonio Banderas.

Ibn Fadlan’s text can be read, translated into English, in a book published by Penguin Classics which also contains various texts by other Arab travelers of the Middle Ages.

Vikings: Characters who can take control of Kattegat in the final chapters