The most benevolent of the æsir is also the god of light and peace. Balder was one of the deities most revered by the Vikings and envied by his fellows.

Within Norse mythology,  Balder ( Baldr , in Old Norse) is the god of light and the second son of Odin. He has a rather influential role in Scandinavian cosmology as an example of virtue and the kindest god of all.

What is Dio Balder of?

Although he is primarily considered the god of light, this is not Balder’s only attribution. Various texts and interpretations portray him as the god of peace or even forgiveness . Something that undoubtedly contrasts with the warlike character of the majority of  æsir .

Be that as it may, Balder was one of the most worshiped Viking gods by humans. Particularly notable were his physical virtues, which also aroused a series of envy in the rest of the gods, especially in Loki. Precisely for this reason, Balder  had prophetic dreams of death,  which his mother Frigg interpreted to try to save him from his fate. 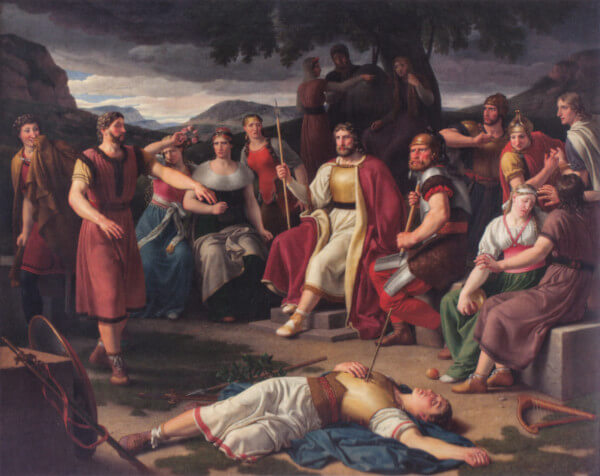 Loki tricks Höðr into shooting a mistletoe arrow at Balder.

The god Balder is the son of Odin and his wife Frigg . He is brother of Hermod and Höðr and half brother of Thor or Vidar among many others. He was married to Nanna, with whom he fathered Forseti, god of justice.

His home was  a castle of glass and silver , the brightest and most beautiful house in all of Asgard. This building was called Breiðablik and kept exactly all the qualities and benefits of its owner: it was clean, perfect and free from all evil. On the other hand, he also owned the Hringhorni , the largest ship in the world.

Neuroscience, motherhood and super productions: this is what the protagonists of 'Game of Thrones' do now

One of the most common symbols are  white flowers, such as daisies . Being the god of peace, it is normal to find this clear similarity with clarity and tranquility. Yet it is the  mistletoe  that probably best reflects his character. According to a myth that we will tell later, the mistletoe allowed him to fight to hell.

Her  long blonde hair , on the other hand, represents the rays of the sun . His name does not have a unique translation, but its root is linked to the word “strength” or “courage”, which already offers clues about his character.

Main myths of the god Balder

Many of the myths in which Balder intervenes have to do with his tragic death.

Odin’s son had premonitory dreams that someone would kill him. He was the god most loved by all, and therefore also the most envied. His powerful mother told him so that she could help him. Then  Frigg traveled the world so that everything that existed swore never to harm his son . As such a beloved figure, everything on earth has kept its promise: from oceans to mountains to animals.

Encouraged by this, Balder invited the other gods to throw objects at him, while everything bounced off his skin. Loki, indignant and jealous of the fame and glory of this god, disguised himself as an old woman and induced Frigg to confess which elements had not sworn their promise. The ásynja confessed that due to the innocent nature of the plant, they never asked the mistletoe. Once Loki had the information, he took the mistletoe and turned it into an arrow (or a spear, depending on the myth version) and gave it to Höðr, Balder’s blind brother . Unaware of the ruse and content of participating in Balder’s games, he used Loki’s weapon to kill the god.

Unable to bear the loss, his wife Nanna threw herself on Balder’s funeral pyre in her magnificent ship Hringhorni. 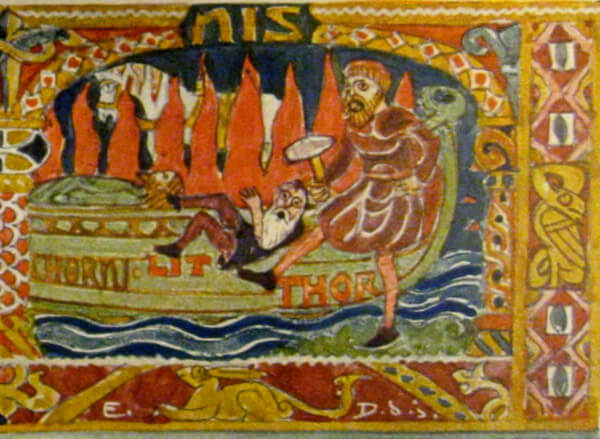 Thor kicks the dwarf Litr during Balder’s funeral on his ship Hringhorni.

There were several attempts by the gods to retrieve Odin’s son from the underworld. Not surprisingly, he was the one much loved by (almost) everyone. Frigg, his mother, asked for help to get him back. Balder’s other brother, Hermod, volunteered and it took him nine days to get to hell.

Finally Hela, the goddess of the underworld, told him that if absolutely all things on the planet mourned the loss of the god, he would come back to life . In this way, all beings cried inconsolably, except for one giantess, who felt no pain. It was revealed that this creature was none other than Loki in disguise. The punishment was immediate and the gods buried him underground, tied to three ends of a rock and placing a series of snakes on top of it that dropped their corrosive poison on his bare skin.

Viking symbols and their meanings

Loki’s wife, Sigyn, took pity on him and kept a cauldron right underneath so the poison wouldn’t touch the god. When the cauldron was full, the woman moved it to empty it. Loki writhed in pain from the poison that hit him, and that’s where earthquakes come from.