Beautiful and seductive, Freya is the goddess of love and lust. This vanir  sometimes led the Valkyries and took half the warriors who fell in combat.

Possessing unique beauty and extraordinary leadership skills, Freya (or Freyja) is, along with Frigg, the most revered female deity ( ásynja ) in Norse mythology . Goddess of love, fertility, lust and beauty , Freya was invoked to assist in childbirth, make love happy and ensure good seasons. And we will tell you its story.

Paradoxically, the origins of the Norse goddess of love are closely linked to combat. The Vanir and æsir are said to have  fought a great war. The origin of the conflict was the mistreatment that Gullveig suffered at the hands of the latter. The peace treaty that ended the clash provided for an exchange of hostages: the transfer of the god Njörðr from Vanaheim, homeland of the Vanir , to Asgard, homeland of the æsir was agreed . It was there that Njord , married to his sister Nerthus, fathered two beautiful and no less powerful children: Frey and Freya.

Freya, who paid close attention to the prayers of lovers, was often invoked by them. Normally, these prayers took place by means of songs on festive occasions. But far from being a gentle goddess,  Freya used to lead the Valkyries . He also claimed that half of the Vikings killed in battle (as the other half belonged to Odin ). Once in possession of them, he moved them to his home, and there he entertained them conveniently.

It is said that  the goddess Freya wept tears of red gold when her husband, the god Od, left her for long periods of time . However, and like any great goddess of love and lust, she was the true owner of herself. In this way, he enjoyed the company of many lovers, although his favorite was always his brother Frey. 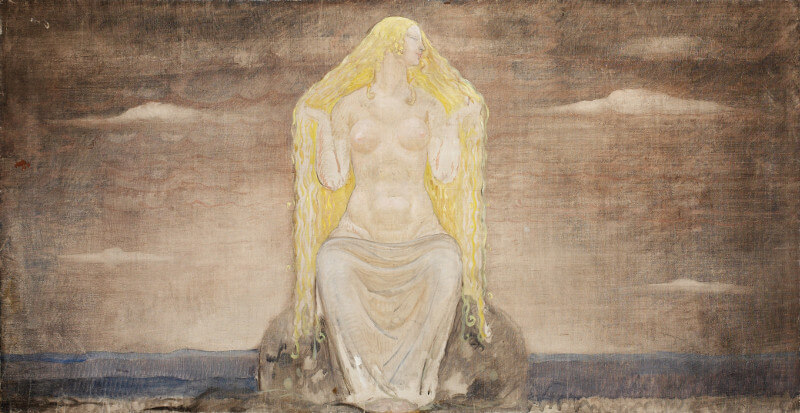 The main manifestation of the goddess Freya is  regeneration and vital freedom . She was reputed to be a very beautiful, lustful and voluptuous young woman, and it was the ásynjur who received the most prayers of love. It was customary to toast his health on the most solemn occasions.

Freya or Freyja (from Old Norse frú : woman, lover, lady) also has many other names. Each time he traveled among the people in search of Od he received a new nickname: Gefn, Sýr, Hörn or Mardöll (light of the sea). She was also known as the “Lady of the Vanir” (or Vanadis), Gersimi (jewel) or Menglödh (“cheerful with her necklace”, her most characteristic object).

And it is that the goddess  Freya wore a gold necklace known as Brisingamen , which represents the sun and the transition from day to night. She was also the owner of  a huge cloak made of falcon feathers (Valshamr) which allowed her to transform into any bird and soar in the skies at will. However, he was  traveling on a chariot pulled by two big cats: Trjegul and Bygul . But these were not his only animals, as he also possessed a boar, Hildisvini, which served as a protective talisman in wars.

The goddess Freya lived in a palace in Asgard called Fólkvangr , where she housed half of the soldiers who died in combat.

The main myths of Freya

The legends of the necklace

There are several legends related to Brisingamen, the famous Feya necklace. The first of all goes like this:

There was a cave not far from Freya’s palace in which four skilled dwarves lived. One day, the goddess observed a gold necklace in the cave which became an obsession for her . He offered them large quantities of gold for him, but the dwarves wanted a very different payment: that Freya spend a night with each one.

The goddess eventually agreed, thus obtaining the long-awaited necklace, but the god Loki knew of all this and informed the god Odin, who ordered Loki himself to take the Brisingamen from him. However, the great goddess of love sensed what had happened and, disassembling all that maneuver, she managed to get back her necklace.

Odin demanded the same payment as the dwarves, but eventually gave the necklace to Freya without her request being met. 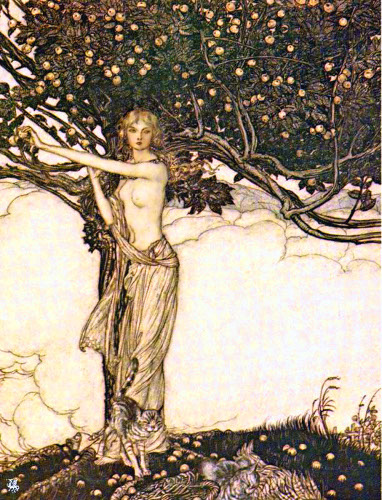 The story of Angantyr and Ottar

Ottar and Angantyr argued long and hard about their property rights. Since the two men were unable to find the solution to their dispute on their own, they decided to expose it to the Viking gods .

The assembly of Asgard decreed that the dispute would be resolved in favor of the one who could prove that his lineage was more extensive and noble. But Ottar could not remember his ancestors , so he offered sacrifices to the goddess Freya and begged for her help.

Freya, who heard all his prayers, appeared before him and turned him into a boar. And riding on his back he headed for Hyndla’s abode. It was a famous sorceress capable of retracing the entire genealogy of Ottar, also summarizing the deeds of every man. Finally, thanks to the help of the goddess, Ottar was able to obtain his coveted properties.