The queen of the Norse gods

Goddess of fertility and marital love, Frigg was revered by married couples. He has always displayed a majestic appearance and was noted for his cunning.

One of the most prominent asynjurs is Frigg , Odin’s wife and the greatest prototype of wife and mother that Norse mythology offers .

What is the goddess Frigg of?

Frigg’s powers are very broad. Among other things, Frigga is the Norse goddess of fertility, marriage, motherhood and the domestic arts . It was invoked in the Parthians, where the Vikings used a sedative plant called “Frigg’s wort” (cuajaleche or Galium verum ).

Furthermore, as the wife of the god Odin , she is considered the queen of the heavens and the æsir . In fact, only the two of them have the right to sit on the throne of Hliðskjálf.

Frigg had his own palace, called Fensalir . In this place he invited married couples who led a virtuous life, so that they could enjoy the company of their partners after death.

On the other hand, this ásynja has the gift of prophecy . Although, curiously, he never reveals to anyone what he knows.

The origins and kinship of Frigg

As a result of her bond with Odin, Frigg is the mother of Balder , Höðr and Hermóðr . She is also the stepmother of Thor , Heimdall and the rest of the one-eyed god’s children. In turn, she is the daughter of Fjörgynn.

One of his best friends is Eir, the goddess of healing and health. In addition, Frigg has numerous servants at his disposal , including Hlín, Gna and Fulla. Not only do they help her with housework, but the goddess often sends them out on errands.

Representation of the goddess Frigga

Frigg is described as a tall and beautiful goddess, very fond of jewels and sumptuous dresses . It is said that his mood was changeable, to the point that he dressed in black or white depending on his mood.

His hobbies include weaving clouds using a spinning wheel so luxurious that it glows in the dark. In fact, the Vikings called the constellation we know as Orion’s belt “Frigg’s spinning wheel”.

It can sometimes be identified in Viking art because it appears seated on the Hliðskjálf . From this throne, she and Odin could see what was happening in the nine worlds.

Frigg can also be represented with keys hanging from his waist, as this is the symbol of a married Nordic woman.

The Viking attack on Lindisfarne

Here are two Norse myths in which the goddess Frigg plays an important role.

The Grímnismál is one of the poems that make up the poetic Edda . In this story, the goddess Frigg shows her cunning.

The Grímnismál features two young sons of a king: Geirrod, the protégé of Odin, and Agnar, the protégé of Frigg. Both had been raised by Odin and his wife , disguised as shepherds, and each had received wise advice from their godfather. When both princes were old enough, they took different directions. Geirrod returned to his country to inherit his father’s kingdom, while Agnar decided to live with a giantess in a cave.

At this point, Odin and Frigg were observing what was happening in the world when they discussed the plight of their godchildren. Odin was proud of Geirrod, who had become king, and made fun of Agnar . However, Frigg replied that Geirrod was a bad and greedy man, “so stingy at his parties that he tortures his guests if he thinks too many have come.” Odin decided to prove to his wife that this grave accusation was unfounded.

Thus, Odin disguised himself and went to Geirrod’s house calling himself Grímnir. The crafty Frigg decided to deceive the king , sending his handmaid Fulla to warn him of the arrival of a foreigner with evil intentions. Fulla explained to Geirrod that he would easily identify this man because the dogs would not attack him. And so, Grímnir was unceremoniously captured.

Geirrod had his strange host tortured for more information, but Odin remained silent. For eight days the god was burned between two bonfires . The king’s son, named Agnar after his brother, took pity on Grímnir and gave him a horn of mead to drink. Then Odin revealed his true identity.

Geirrod’s surprise was such that he rushed, sword in hand, to free his prisoner. However, his haste was such that he tripped and fell on the sword, dying from his own weapon. Later, Odin disappeared and little Agnar reigned for many years. 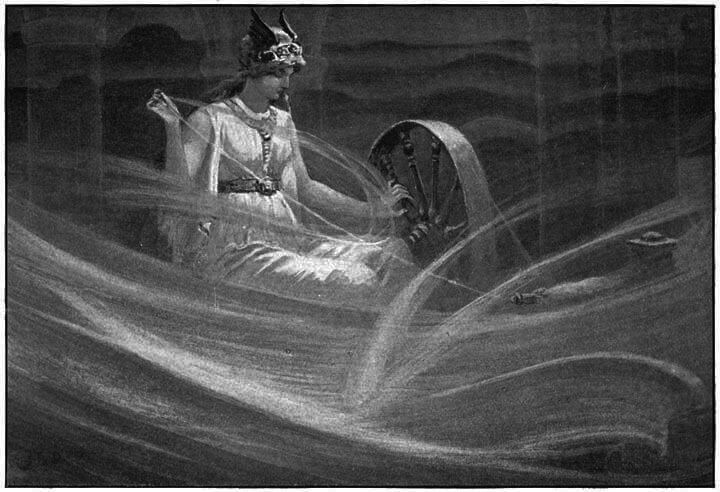 The Stolen Jewel and Odin’s Anger

In one myth, Frigg’s obsession with jewelry is the cause of calamities. It all begins when the goddess steals a piece of gold from a statue representing Odin , erected in one of her temples. After owning this piece, Frigg gives it to the dwarves to make a precious necklace.

The absence of gold did not go unnoticed by her husband, who asked the dwarves the author of the theft. Since no one dared to unmask Frigg, Odin decided to let the statue itself speak . He ordered that it be placed at the entrance of time to apply runes that would give him the faculty of speech.

Faced with this situation, Frigg sent his servant Fulla to find a solution. Fulla returned accompanied by a hideous dwarf who said he would stop the statue from speaking if Frigg gave him a smile. The goddess consenting to her request, the dwarf headed to the temple, infused the guards with a deep sleep and tore the statue to pieces.

This sacrilege provoked the wrath of Odin, who decided to leave Asgard. His brothers Ve and VIII attempted to replace him at the command of the æsir , but without success. Taking advantage of the gods’ lack of leadership, the Jotuns invaded Midgard and covered it with snow, ice and cold fog.

Seven months of hardship passed until finally Odin had pity and decided to return . The god of war and wisdom drove the giants from the Earth and everything was as before.