Much Viking culture has always remained hidden from the eyes of most of the world. And a good example of this is glima , an ancient type of combat that is  somewhere between combat and martial art.

The difficult translations of the Nordic languages, as well as their isolation for climatic and social issues, have turned the history of the Vikings into a secret that, little by little, we are managing to unravel.

What did the Vikings use glyme for?

Throughout history and since the emergence of humanity, different forms of hand-to-hand combat have been designed anywhere in the world. Its purpose was to prepare soldiers not to lose their aggressive capacity in war situations in which they were unarmed .

At a time when hand-to-hand combat was prevalent, the Norwegians could not entrust everything to Viking weapons . Any resource was good on the battlefield.

With the evolution of equipment and the diminishing need for their learning for terrible purposes, this type of struggle has become a source of entertainment, pleasure and recreation.

Glima is a style of contact fighting, or more specifically, grip. In Old Norse , the word glima means “lightning”. This refers to the speed of fighting techniques, which require reflexes.

The principles of glyme are as follows:

There is a code of honor known as Drengskapur for treating opponents with respect and fairness. 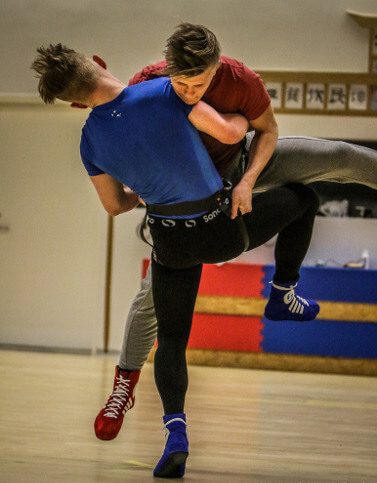 There are three types of glime.

The most common version of the glyme is, in fact, what in Iceland is known as glyme. It is the national sport of this country and technique prevails over strength . The two opponents put a series of straps around the waist and thighs. Each fighter grabs his rival by these straps and tries to take him down. In the byxtagsglima, anyone who touches the ground with a part of the body between the elbow and the knee loses.

Unlike byxtagsglima, in livtagsglima strength is more important than technique . Opponents cling to the upper body. The winner is the one who makes his opponent touch the ground with any part of the body other than the feet.

A more creative and free version of glima where wrestlers can resist as they wish. All fighting techniques are allowed and the winner is the one who remains standing while his opponent is on the ground.

Glima, the story of a millenary martial art

The  glima  has its roots in the  ninth century , finding evidence in the Nordic era poetry, albeit with vague references and inaccurate. However, it is only  in the 12th century that  more concrete references such as those found in the well-known Edda P rosaica manuscript begin to be found  .

After various translations,  clearer indications of this type of struggle, as well as of its first rules and regulations , have also been found in  some Icelandic sagas of the same period. And it is that this martial art was, without doubt, one of the main responsible for the military success of the Vikings.

His hard training began between the ages of 6 or 7 , trying to improve and develop strength, reflexes, endurance and courage. They included animal fights, freezing temperatures outdoors, and fights with other children. A terrible struggle in a scary world.

In the year 1325, in the Jónsbók law book, (considered the most important legal book in Iceland), it is also confirmed how the original Norwegian settlers brought this fight to Iceland . Their combat systems, rules and training techniques have been included in this text to this day.

References are increasingly found in the late Middle Ages, such as in the  Icelandic law book known as Grágás , where a series of Norwegian rules and laws on combat are collected and transcribed that have remained virtually unchanged to this day. And it is that one of the main characteristics of this city has always been to preserve and conserve its cultural heritage.

From the beginning of the 20th century to the present day, glima has gradually lost its military role to become a sport . The first competition was held in 1906 at the Stockholm Olympic Games of  1912 , a show that made her famous throughout the world and even fomented once the enthusiasm throughout Scandinavia.

In fact, it was approved as  an Olympic sport for the 1920 Antwerp Olympics , although an unforeseen event occurred. The scheduling of an official trip to Iceland by the King of Denmark for the same dates as the games caused it to be canceled. The authorities organized, in his honor, a competition between the best Icelandic fighters. Eventually the king canceled the trip for health reasons and this martial art missed the opportunity to become an Olympic sport.

Viking names, names with a lot of meaning

And these are some of the most important facts you should know about  glyme . A type of combat halfway between martial art and combat that has been rooted for centuries in the cold landscapes of northern Europe. Another secret of the many who still hide the indomitable Vikings.