Gifted with unparalleled sight and hearing, Heimdall was the guardian of the gods. Its main task was to protect the Bifröst or rainbow, which was the bridge that connected Midgard with Asgard.

The origins of Heimdall

Few characters in Viking mythology have such a mysterious origin. And it is that Heimdall is the son of Odin and nine giant sisters : Augeia, Aurgiafa, Atla, Egia, Gjálp, Greip, Iarnsaxa, Sindur and Ulfrun. The leader of the gods was walking by the sea when he saw these nine young women sleeping peacefully on the sand.

Odin fell in love with their beauty and conceived a child with them. Somehow, the giants came together to give birth to Heimdall . The nine mothers raised him hard, so he grew up very fast.

He soon left to join Asgard along with his father. He arrived in the realm of the gods just as they were deliberating on who should guard the recently completed Bifröst bridge. Young Heimdall ran for office and was elected. From that moment on, Heimdall observed the bridge day and night.

To do his job most effectively, the Viking gods gave him extremely refined senses. In this way, Heimdall was able to see hundreds of miles away as clearly during the day as at night. Also, his hearing was so fine that he could hear the sheep’s wool and grass growing . Eventually, he could go without sleep for several days.

Its most characteristic object was the Gjallarhorn , the horn that was to sound to announce the arrival of the intruders. His resplendent white armor was another of his attributes, which is why he was known as the White God. He was also distinguished by his gold teeth, which earned him the nickname of Gullitani (“the one with the gold teeth”).

Heimdall lived in a building called Himinbjörg , located at the end of the Bifröst. There he received visits from the other gods. Each morning, first, he rode a swift golden-maned horse named Gultoppr to announce the new day to the gods. For this reason he was known as  Heimdellinger  (“the one who brings light into the house”).

The main myths of Heimdall

Heimdall participates in numerous episodes of Scandinavian mythology, always with a positive role. We collect here the main stories in which this son of Odin appears.

The Brisingamen necklace by Loki and Freya

Ever alert and with extremely keen senses, Heimdall discovered that Loki stole the Brisingamen gold necklace from Freya while she slept. He first heard cat’s footsteps in the direction of Freya’s palace, Fólkvangr. As he looked there, he saw a fly sneaking into the goddess’s chambers. It was about the evil Loki changing shape!

Since he could not steal the necklace of Freya without waking her, Loki was forced to change her position. Before Heimdall’s distant gaze, Loki turned into a flea and bit the Lady of Fólkvangr, who moved in his bed without waking up. He was finally in a position where Loki could open the necklace, so he didn’t think twice and took it.

At that moment Heimdall ran out to catch the thief. When he reached out and drew his sword, Loki turned into a blue flame. The guardian of the Bifröst reacted by turning into a cloud and raining to put out the fire. Loki, in turn, became a polar bear willing to swallow water. Then Heimdall also turned into a bear and started a fight.

Seeing the thief he had a chance to lose, he changed form once again, into a seal. The White God followed suit, and after a fight with the seals Loki had to admit defeat . Eventually, Heimdall returned Brisingamen to its owner. 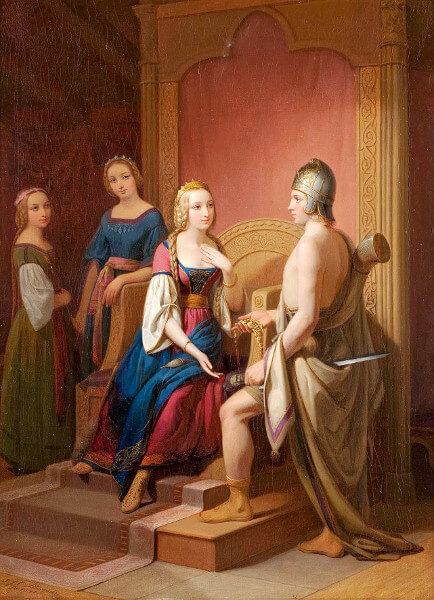 Ríg and the origin of social classes

Heimdall once took a few days off to hike Midgard. Walking along the seashore, he came across a humble hut where Ai (great-grandfather) and Edda (great-grandmother) lived. The couple, without recognizing him, invited him to share their poor porridge. Heimdall, who said his name was Ríg, accepted the invitation and stayed in the cabin for three days, giving them a lot of useful advice. Then he resumed his journey. A few months later, Edda gave birth to a dark-skinned baby whom she named Thrall.

As Thrall grew, he displayed extraordinary strength and an aptitude for heavy work. He took as his wife Thyr, a strong girl who also worked from dawn to dusk. The couple had several children and their descendants were slaves or slaves.

Leaving the hut, Ríg headed inland, where he found a fertile farm. His owners, Afi (grandfather) and Amma (grandmother), invited him to have their simple but hearty meal. The traveler spent three days on this farm, sharing wise knowledge during his stay.

Months after leaving, Amma fathered a robust blue-eyed son named Karl. Karl stood out for his aptitude for field work. She married Snor, with whom she had many children and started the peasant or free man class.

On the last leg of his adventure, Ríg arrived at a majestic castle perched on a hill. There he was entertained by the wealthy Fadir (father) and Modir (mother), nobles who gave him exquisite meats and refined wines for three days.

Finally, Heimdall returned to Himinbjörg to protect the Bifröst. Modir gave birth to a thin and beautiful son named Jarl. Young Jarl excelled in hunting and fighting skills. Later he would marry the beautiful Erna, with whom he would enlighten the noble class. The youngest of them, Kon, would become king of Denmark.

Heimdall’s role in Ragnarök is pivotal. He will be the one to play the Gjallarhorn to warn the gods of the invasion of the giants. During the fight, Heimdall will be the last of the gods to die. He is destined to fight with Loki, both having died after an even match.

Heimdall is undoubtedly known in popular culture thanks to Marvel comics. He appears as an important character of  Thor , where he receives the name of Heimdall . Surprisingly, in the film adaptations the White God is embodied by a black-skinned actor, Idris Elba.