King of the sea

The  Vanir were led by Njord, the god of the sea and one of the most important deities of the Norse pantheon. Rich, supportive and peaceful, he was highly revered by the Vikings.

What is God Njord of?

Like all  Vanir , Njord was a peaceful deity and more rooted in nature than in human activity. Specifically, we are talking about the god of the sea, which includes fishing or navigation , as well as fertile land. He was invoked to calm storms and to be lucky in fishing, sea travel, or business in general. We don’t have much information about the god Njord, but we do know that a sea people like the Viking loved him very much.

Origins and genealogy of Njord

Njörðr or Njord belongs to the Vanir clan  and is, in fact, their leader. Together with one of his sisters, Nerthus, he fathered the twins Frey and Freya . However, at the end of the war between the æsir and the  vanir he had to move to Asgard along with his two sons. They were part of Odin’s court, but they were not free to leave this place.

The sirs condemned incest, so Njord was forced to separate from his mate and never mentioned her name. Subsequently, he had another relationship with the giant Skaði. 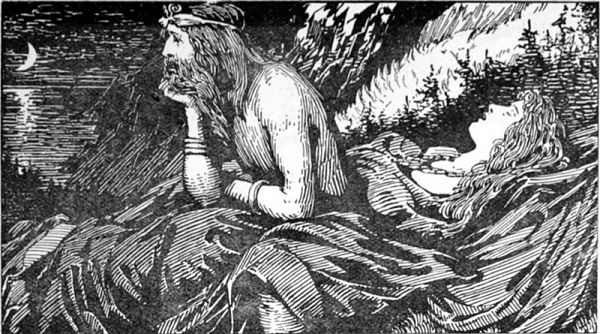 The Desire of the Njord Sea (1908), by WG Collingwood.
Odin, the Viking god of war and wisdom

Njord originally lived in Vanaheim, the world of the Vanir . Specifically, in a wooden palace on the coast known as Nóatún . Its sacred animals are the swan and the seagull, and in a sense it is considered a personification of summer. After the conflict between æsir and  vanir , the Norse god of the sea comes to reside in Asgard.

Another feature that characterizes Njord is its prosperity. In fact, Old Norse had a saying, “be rich like Njord” , to define the richest.

There aren’t many stories about this god from Norse mythology that have survived to this day. We highlight the following.

The æsir killed the giant Þjazi after kidnapping the goddess Iðunn. The giant’s daughter, Skaði, presented herself to Asgard, arms folded, seeking revenge. To make amends, the Norse gods gave her various gifts. 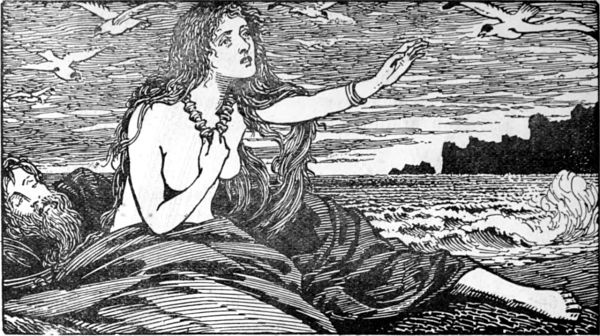 “Skadi’s Desire for the Mountains” (1908) by WG Collingwood.

Among them, they allowed her to choose a husband from all the individual gods. But on one condition: he could only see the feet of the candidates. After examining the feet, he chose the ones that looked cleaner , believing that they corresponded to Balder , the beautiful god of light. However, they were the feet of Njord, the god of the sea.

They reconstruct the face of a Viking warrior

That’s how they both got married, even though their relationship didn’t end well. Njord and Skaði constantly quarreled over the location of their home . The  vanir was used to living near the sea and could not stand the cold of the mountains and the howling of the wolves of Jötunheim; the giantess was irritated by the sound of the surf and the chirping of seagulls. The couple alternated between staying in each other’s home, nine days in the land of Skaði and three days in Nóatún (winter-summer representation. However, they ended up separating to live in their respective homes.