The series “Vikings”,  has many times surpassed fiction for its high content of drama and emotion through its mythical characters that existed in real life, but that history has erased.

With six seasons, “Vikings” has come to an end and it is still difficult to know how real some of the many characters that appeared in the series were and how many existed as a product of fiction, adding to the mythology and that there is not much reliable historical data that can prove the veracity of each of them.

Supremacy of power and nobility in each character

At the end of the series, we tell you about the fifteen characters who were inspired by real warriors and Vikings.

He was the first Viking to come from his village in France and England. In the story, his character is based on several Vikings of the time and not just one. He is supposed to have been the first to claim land in the conquered territories, in real life he is also the father of Bjorg Ironskin and Ivar the Boneless.

She and Ragnar met in battle, fell in love, married and had three children. Lagertha is strong and independent despite being a peasant. At the time, Ragnar leaves her to go with Thora, a character who does not appear in the series.

He was one of the ancestors of William the Conqueror, who would later become William of England. In the series he is Ragnar’s brother, in real life not. He was born around the year 860. He made the leap to France in the year 885 and founded the Duchy of Normandy, which he ruled from 911 to 917.

He was a conquering navigator who faked his own death to penetrate the walls of Paris, (in the series it is Ragnar who fakes his own death). He is one of Ragnar’s possible sons with Aslaug, not Lagertha, he is Ivar’s older brother with no bones.

Ragnar Lothbrok’s eldest son was named for a bone disease that made his bones brittle and he walked with difficulty. He was the conqueror of York and attacked Scotland with King Dublin and Olaf The Bank, which is why they called him King of the Norse of all Ireland and Britain. He died of unknown causes in 873.

Unlike the series, he had no relation to Ragnar or Ivar. He lived in the 19th century and was one of the great commanders of the Great Pagan Army.

His real name was Halfdan Ragnarson. He was the son of Ragnar and Aslaug and was another of the main commanders of the Great Pagan Army. He was captured and asked to be burnt at a stake of human bodies.

Daughter of the hero Sigurd and a Valkyrie named Brynhild, she was raised by some peasants who found her abandoned and covered her face with earth to hide her beauty. Ragnar sees her and decides to marry her. In the series she is the mother of Ubbe, Hvitserk and Sigurd, but in real life she was the mother of Bjorn.

He was the first Viking to come to Iceland on purpose. The nickname ‘Raven Floki’ is due to the fact that he used two trained ravens to calculate the distance to his home. Everything that happens in the series before the fifth season is fiction.

Character inspired by the first Viking who unified Norway into one kingdom. He was rejected by the woman he loved. He promised not to cut his hair until he had unified the Nordic peoples into one.

Son of King Ecgberth of Wessex. In the series he is shown as a weak king, but the story shows that he was a strong leader who protected his people from the Viking invasion. He had six children with Queen Osburh, his first wife, and not with Judith as told in the series.

King of West Frankia in 875. He used bribes to prevent the massacre of the Vikings. His fate never crossed the character of Rollo. His title of king was obtained in the year 875, a decade after the production of Vikings reports.

He was a holy warrior in the army of Wessex in the service of Aethelred and Alfred the Great. In the series Gunnhild kills him, but he is actually believed to have died in the year 871. In real life he did not meet Lagertha, while in the series the two have a romantic relationship.

He was the first to become king at the beginning of the 9th century. He hated Christians and converts. He appears in the first two seasons, managing to convince Ragnar to help him defeat the Danish king. He was killed by his nephew and not by Ragnar as depicted in the series. 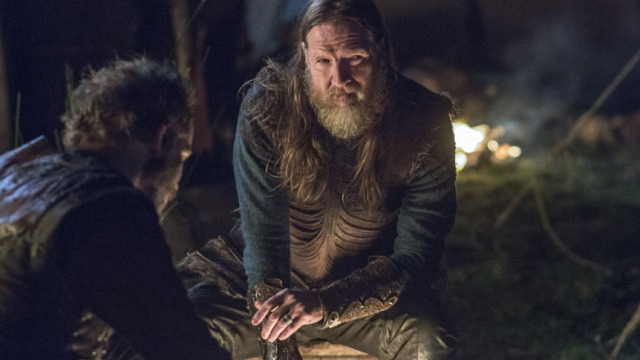