The ruler of Muspelheim

The realm inhabited by the fire giants is led by Surt. He is one of the great antagonists of the Norse gods, who also plays a pivotal role in Ragnarök and the destruction of the world.

The representation of Surt

Surt, also known as Surtr or Surtur in modern Icelandic, is the lord of Muspelheim, the realm of the muspeli or fire giants. Its name means “brown” or “black” , probably due to its charred appearance. Represents chaos and destruction, a perfect opponent for the creator gods.

Undoubtedly, its most representative object is a flaming sword. According to myths, this powerful weapon is endowed with an extraordinary capacity for destruction. And it is that Surt is destined to destroy the world with her.

The main myths of Surt

During the creation of the world, Surt also played a small role. As the new Midgard was dark, Odin and his brothers Vile and Ve headed to Muspelheim to steal some sparks from Surt’s sword. The two largest sparks were used to create the Sun and the Moon, and with the rest they formed the stars. In this way, Midgard received the light.

The myth of Ragnarök speaks of a final fight in which the gods must face various hordes of enemies and monsters: the ice giants or jotun, the fire giants or muspeli, the serpent Jörmundgander, Loki, the wolf Fenrir. Surt is the one who commands the army of fire giants from Muspelheim.

The Völuspá, the first poem of the poetic Edda, tells of Surt’s break-in in this verse:

Surt from the south,
brandishing fire.
The sword of the gods shines in the dark,
like the stars in the night.
Mountains will crumble to rubble
and demons will fall.
Man walks the path of ruin
as the sky opens in two.

The gods ( æsir  and vanir ) and the einherjer or inhabitants of Valhalla meet these invaders on the battlefield called Vígríðr. Surt’s destiny is to kill Frey , this being the first god to die. According to the prophecy, Frey will be disarmed because he will have lent his powerful magic sword to his servant Skirnir to woo the giantess Gerd.

The fierce struggle is claiming the lives of important figures such as Odin, Thor or Loki. At the height of the battle, Surt unleashes the full  power of his flaming sword and sets the entire universe on fire. After destroying everything and everyone, the land sinks into the sea.

Only the Forest of Hodmímir withstands the devastation unleashed by Surt. A man and a woman, Líf and Lífþrasir, took refuge in this remote place, generating the new human population of the world. 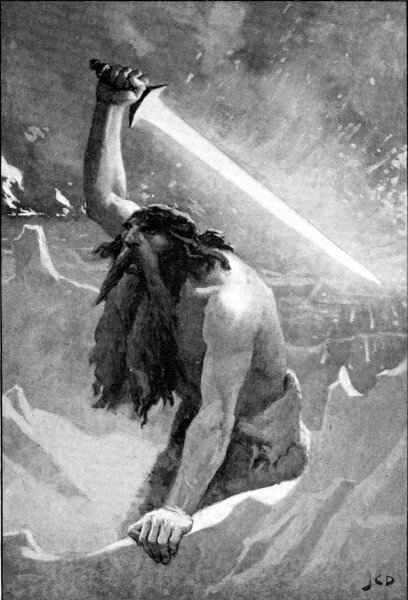 Surt, in an illustration by John Charles Dollman.

Surt participates in the Marvel comics of the Thor series and appears in various works of fiction. As a curious note, a volcanic island that emerged off the Icelandic coast in 1963 was named Surtsey, meaning Island of Surt.