Selecting the most courageous

Every Viking warrior wished to be picked up by the Valkyries and taken to Valhalla. These powerful Amazons occupy an essential role in Norse mythology.

Who were the Valkyries?

The Valkyries or Valkyries were  dísir or minor female deities who served Odin. His role was to watch the battles and then choose the bravest of those who died in combat . The elect were called einherjer and their spirits were transported to Valhalla. In this Asgard hall they enjoyed constant festivities and the beauty of the Valkyries, who served them mead. The einherjers are destined to fight alongside the gods in Ragnarök.

In some texts, the goddess Freya leads the Valkyries . In fact, she claims half of those killed in battle, who go to her Fólkvangr palace. Coincidentally, in some sagas the Valkyries appear as lovers of heroes or mortals.

It is not possible to confirm how many Valkyries there are in Norse mythology. Sometimes they form groups of nine, a very significant number for the Vikings. Below we provide examples of named Valkyries that appear in some texts.

What does “Valkyrie” mean?

The word Valkyrie, in Old Norse  valkyrja (plural valkyrjur ), means “she who chooses the fallen in battle”. The original term is composed of two words:  valr or “killed in battle” and  kjósa or “choose”. Some epithets applied to them in ancient poems are “servants of Odin” or “servants of desires”.

In the surviving Norse texts we find no explicit reference to a possible common origin of the Valkyries. However, it is explained that some particular Valkyries had mortal parents. For example, in Helgi Hjörvarðsson’s Song there are nine Valkyries led by a Sváva call. It is said that she was the daughter of a king named Eylimi. In this same text, further on, the Valkyries are commanded by Sigrún, daughter of King Hogni. Likewise, Brunhildr or Brynhildr of the  Völsunga Saga is a Valkyrie daughter of a king.

It should be noted that, at times, some mortal women were called Valkyries for a poetic license. On the other hand, in other sources we find some confusion between Valkyries and Norns: Skuld is attributed both an integral role of the Norns and a work of Valkyrie. 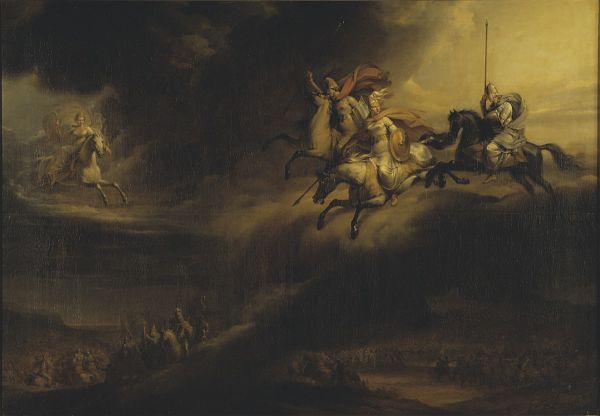 “Valkyries on horseback in battle”, by the Swedish painter Johan Gustaf Sandberg.

Thralls: Slaves of the Vikings

Vingólf: the abode of the Valkyries

The residence of the Valkyries is Vingólf (“pleasant room” or “wine room”), located near Valhalla. This place is mentioned three times in the course of Snorri Sturluson Edda in prose , although the function attributed to it is multiple. First, it is said to be the home of the einherjers . On the other hand, it is described as a sanctuary for the Valkyries. Finally, it is said that it hosts the banquets of the gods.

The Viking bracelet: an award for the best warriors

Odin is called “the father of all” because he is the father of all gods. He is also called “Father of the Fallen”, because all those who have fallen in battle are his adopted children; for them he reserved Valhalla and Vingólf, and they are called einherjars. ‘ Gylfaginning , Edda prosaica .

Its usefulness for hosting parties for the gods is also mentioned in the Icelandic poem Hrafnagaldur Óðins.

Vikings: Do you know the true story of Rollo?

Appearance and representation of the Valkyries

Valkyries are said to resemble young, beautiful and strong women . They wear armor, helmets and spears. They are excellent Amazons, possess superhuman strength and are distinguished by their spear, sword or bow handling. It is said that their armor shone so bright that it reflected a powerful and strange light that illuminated even at night: the Northern Lights.

The image we have of the Valkyries is that they rode winged horses. However, some experts point out that they could ride wolves . They support this hypothesis in the expression “Valkyrie horse”, which in some Nordic poems was equivalent to the wolf. On the other hand, this would be related to the behavior of the wolves, who went into battle to search among the corpses of the warriors. 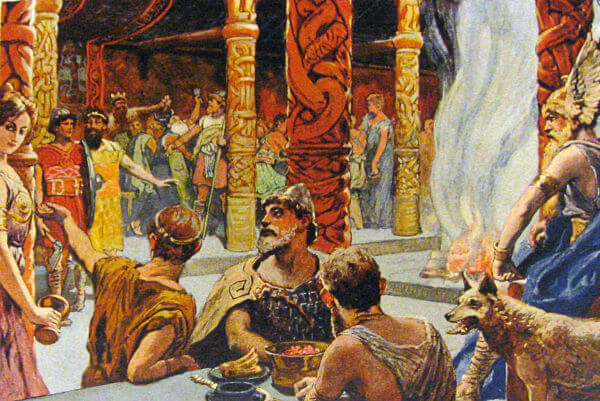 ‘Valhalla’, illustration by Emil Doepler in which the einherjers are served by the Valkyries.

The names of the individual Valkyries can be found in various myths and poems. Here is a list with examples and the meaning of their names.

Vikings in Paris: attacks and looting

Like so many aspects of Norse mythology, these characters appear in works of popular culture. The most obvious example might be  The Valkyrie , a work by Richard Wagner composed in 1856 that contains the famous piece The Ride of the Valkyrie . We can also find them in numerous paintings, in the Thor comic  and even in Viking-themed video games such as God of War .