Today we face one of the most surprising feats of the Vikings: the  Varangian Guard. An elite military unit that protected the emperor of the Byzantine Empire and defended Constantinople for centuries.

Some sagas tell us about these Varangians or Swedish Vikings who found their fortune in the richest and most powerful empire of their time.

Who were the Varangians?

The Varangians or Russians were Vikings from Sweden who were expanding to the Russian steppe. Before, they engaged in the fur and slave trade, piracy and the trade of mercenaries. They later dominated the local tribes and founded their cities. Sailing on rivers and lakes, they came to make contact with the capital of the Byzantine Empire in the eastern Mediterranean.

Although they initially traded with Constantinople, they soon broke out with the Byzantines. In 860, these Swedish Vikings besieged the city. This attack on one of the richest cities in the world was unsuccessful, yet the Varangians caused a great impact for their ferocity and cruelty.

The word ‘varego’ comes from Old Norse  væringi , a combination of vár (‘promise’) and gengi (‘companion’); that is, something like “sworn partner”.

History of the Varega Guard

How was the Varega Guard formed?

Surprisingly, their military performance and brutality exhibited during the devastation of Constantinople led the Byzantine Empire to hire the Varangians as mercenaries. Thus, about 400 Vikings took part in an expedition to the Italian peninsula and about 700 to another in Crete. Over time the good performance of these Nordics in support of the Byzantine troops led to the next step: the formation of the Varangian Guard.

In 988, various local uprisings forced Emperor Basil II to seek help from Prince Vladimir of Kiev. The Byzantine Empire received 6,000 Rus and in return Vladimir converted to Orthodox Christianity and married Princess Anna, sister of Basil II. With the threats removed, these Norse soldiers became the Varangian Guard, an elite corps to protect the emperor.

The Varangian guards were known not only for their ferocity but also for their loyalty. They swore allegiance to Constantinople, not a specific emperor, and rarely committed treason in a context where the local nobility continually conspired to overthrow the current emperor. 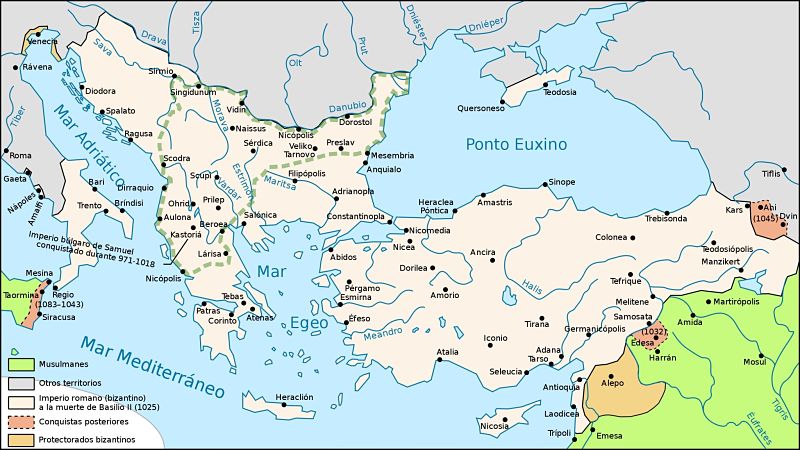 Map of the Byzantine Empire at the time of Basil II.

Evolution of the Varega Guard

From the late 10th century, numerous Norwegians joined Constantinople to join the Varangian Guard for gold and fame. The emperor gave them a very generous salary, part of the spoils of war and the best weapons available. And it is that the Varangians not only had to be prepared to participate in combat. Among its uses was also to make a great impression with its physical appearance and rich weapons on both subjects and foreigners.

They made so much money that some Viking nobles and princes traveled thousands of miles to be employed in the emperor’s service . The best known of them, Harald III of Norway. Having amassed a large fortune, they returned to their homeland with a lot of gold and prestige. And this naturally had a ripple effect on young Scandinavians.

Of course, the behavior of the Varangians was also scandalous. The chronicles of the time record continuous drunkenness in the taverns as well as frequent visits to brothels and the racecourse. Evil tongues called the Varangian Guard the “Emperor’s Skinskins”.

Neuroscience, motherhood and super productions: this is what the protagonists of 'Game of Thrones' do now 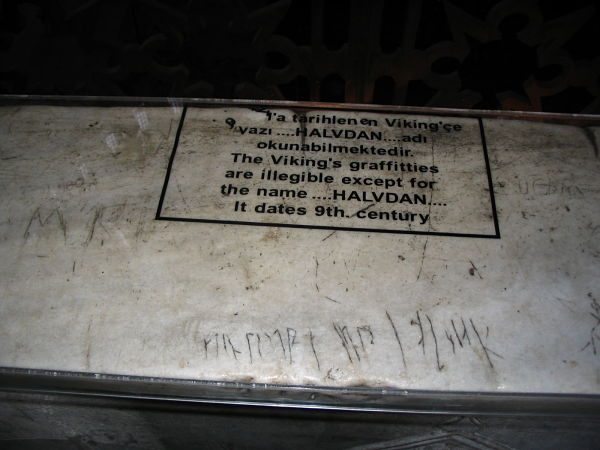 One of the graffiti or runic inscriptions on the ancient Hagia Sophia in Istanbul. You can read a proper name, “Halfdan”.

The end of the Varega Guard

Until the 13th century, between 5,000 and 6,000 soldiers formed the Varega Guard. Although in the early days they were practically all Nordic, with the passage of time their troops also renewed with Anglo-Saxon mercenaries. William the Conqueror’s Norman troops took control of England, forcing many Anglo-Saxons to seek life abroad.

This elite unit fought against the Turkish advance and even against a Christian army in the fourth crusade. The Varangians heroically defended the walls of Constantinopla from July 1203 to April 1204, repelling the outnumbered Crusaders in an infuriating context of palace intrigue.

When the city finally succumbed, the barbarism of the crusade left the Byzantine Empire battered forever. Its economy no longer allowed it to maintain such an expensive elite unit, so the Varega Guard was never the same in troop numbers. The last appearance of this unit on a battlefield occurred in Pelagonia in 1261.

There are much later mentions of Anglo-Saxons and Nordics who were part of the palace guard. And there is also the possibility that this reformed Varangian Guard existed until the final fall of Constantinople into the hands of the Ottomans in 1453.

Duties of the Varegaga Guard

The Varangians in the service of the Byzantine Empire had four main functions:

Organization of the Guard of Varega

The members of this bodyguard were led by an akolouthos (“acolyte”). This commander permanently accompanied the emperor, standing behind him on the throne, ceremonies, etc. 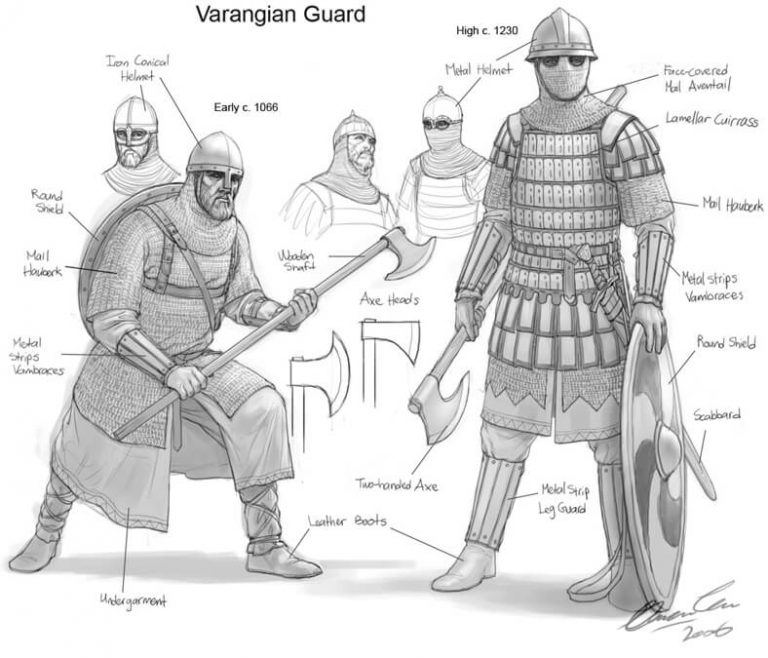 Armament of the Varangian Guard

Sources on this point are scarce, but obviously the endowment of this unit has evolved over the centuries. At first, the Varangians from Kievan Rus would arrive armed with axes and round shields, leaving helmets and swords within the reach of the richest. Being in the service of the emperor, they would probably dress in the Byzantine manner and more uniformly.

What we do know for sure is that his favorite weapon was the long ax or the Danish ax . In fact, the Byzantines called them “ax-wielding barbarians” . They also used double-edged swords and spears accompanied by round shields. His head was protected by an open helmet with a nose guard.