The  Viking attack on the Lindisfarne monastery (793)  has always been considered  the beginning of the Viking era . It was a small island territory belonging to the kingdom of Northumbria, in the north of the present United Kingdom.

We can say that England in general, and more particularly Lindisfarne (from the ancient English “island of those who travel from Lindsey”), mark a before and after in the history of the Vikings. In the following lines we will explain why.

The expansion of the Vikings cannot be understood without England. We don’t know for sure why those lands were so important to the Vikings. The proximity and the strong German migration wave probably had a lot to do with this. Anglo-Saxons, Saxons, Jutes and Frisians were “first cousins” of the Viking people, with whom they shared the same linguistic root and part of their mythology.

Be that as it may,  Viking contacts with the British Isles began long before that  attack. As early as the early 7th century, there is evidence of Viking raids on the Shetland Islands, Orkney, and the Hebrides. But perhaps the main precedent is found at the end of the eighth century.

Stories have it that three Viking ships reached  Portland Bay in 787 . According to the chronicles of the time, that was a  truncated commercial expedition that ended in a massacre .

The  facility found in Portland is believed to have encouraged them to deal with subsequent landings . From that point on, the Vikings began to colonize and settle in British territory. In time, they would come to de facto rule over vast tracts of England. 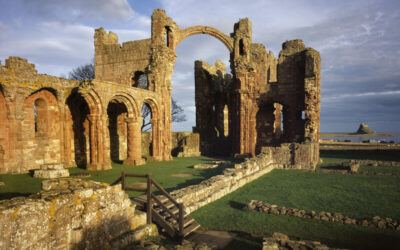 Why was Lindisfarne Monastery so important?

This monastery was  founded by Saint Idan in 651 AD  This Irish monk arrived on the island in 636 on behalf of King Oswald of Bernicia, a former Anglo-Saxon kingdom. Its mission was to evangelize the northern territories of England . The position of the monastery on that island was not accidental. It provided the isolation and seclusion that the monks were looking for.

Vikings in Paris: attacks and looting

Over the years this monastery was consolidating itself as one of the most powerful operational bases of Christianity in the northern lands . Proof of this is the constant flow of monks, faithfully committed to the evangelization of the territory. On the other hand, the famous   8th century Lindisfarne Gospels roll from your desk.

But in order to evaluate the enormous importance of that enclave, it is worth underlining the figure of  San Cutberto . According to the chronicles, this monk performed various miracles during the 7th century. The saint’s remains rested in the monastery and were a source of pilgrimage. The relics of St Cutbert had to be moved after the Viking invasion of Durham Cathedral.

The sack of Lindisfarne

There is evidence that on June 8, 793, the Vikings reached the coast of Lindisfarne. The Scandinavians plundered both the adjacent towns and the monastery itself . Not only did they desecrate the remains of St. Cuthbert, but they killed any monks they found. According to the Anglo-Saxon chronicles, that year “terrible curses” fell on Northumbria: storms, squalls, lightning and ferocious dragons were followed by a period of  great famine . All of this culminated in the Viking invasion of June 8.

The Viking sack of Lindisfarne caused a  tremendous upset for Christianity . Immersed in internal wars, the Christian kingdoms watched with fear the  official beginning of the Viking era . In the following years, the attacks would intensify.

Why did the Vikings decide to attack at that time? Perhaps they had to do with poor harvests in the less fertile Scandinavian lands. The existence of rich lands to the west seemed too tempting a promise to ignore. With the sack of Lindisfarne a new era is ushered in in Europe, with the expeditions of these maritime experts across the Atlantic and the Mediterranean Sea.

Netflix: 5 series to watch if you're a Vikings fan