Jewelery ornaments were a way to show status in Viking society. Men wore a Viking collar or bracelet as a symbol of their successes in battle and expeditions abroad. The women, for their part, wore brooches and pins on their clothes as well as necklaces, earrings and other jewelry.

The jarls or chiefs gave bracelets and rings to their most faithful and outstanding men. Likewise, another common piece of craftsmanship in the Nordic and Celtic peoples was the pair. It is a ring-shaped piece of metal with an open front. It was placed around the neck and was another of the valuables that denoted rank. This type of necklace was in fashion during the Viking era.

The materials used to make Viking bracelets and bangles were, basically, silver and gold. Before coins spread among Nordic cultures, this type of jewelry was also used as a payment method.

On the other hand, the Vikings used foreign coins in their jewelry, for example, from England and Arab lands. They were the result of trade, as well as their looting. Animal themes are common in his jewelry, often with intertwined figures. We can find bas-reliefs and engravings that decorate shields, ritual stones and helmsmen of ships.

In recent years, various treasures dating back to the Viking era have been found in Scandinavia. Particularly surprising are the cases in which amateur archaeologists unearth great fortunes thanks to metal detectors.

Recently, a teenager found the treasure of Danish king Harald Bluetooth in Germany. Among the 600 objects that made up this booty there were numerous coins, including a Damascus dirham transformed into a jewel. Other valuable pieces present in the find were bracelets, collars and pendants. 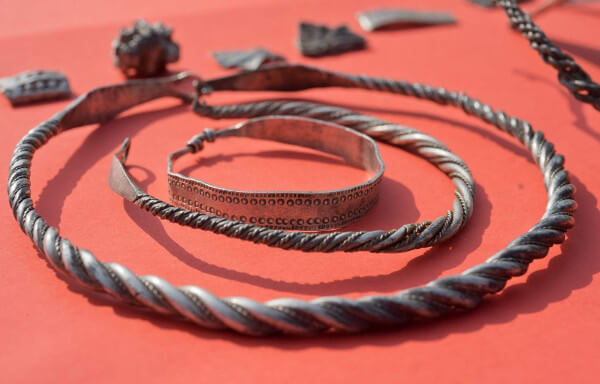 Bracelets and torques that were part of the Harald Bluetooth treasure found in Germany.