A team of researchers from the University of Dundee (Scotland) has managed to reconstruct the face of a Viking warrior who died 1,000 years ago. Using advanced facial reconstruction technology, they produced an image of a woman buried in a Viking cemetery in Solør, Norway.

The remains, currently kept in the Cultural History Museum in Oslo, belong to a woman of about 18 or 19 with a prominent jaw, swollen eyes and a severe forehead wound caused by a sword. The blow was strong enough to damage the bone, leading archaeologist Ella Al-Shamahi to conclude that it is ” the first evidence found of a Viking woman with a war wound “. Scientists found signs of healing in the wound, so it’s unclear whether this was the cause of death.

New technologies allowed the University of Dundee team to work on muscle and skin reconstruction. Caroline Erolin, of the Scottish University Center for Human Anatomy and Identification, noted that “the resulting reconstruction is not 100% accurate, but it is sufficient to produce a recognizable image for someone who knows it well in real life.” 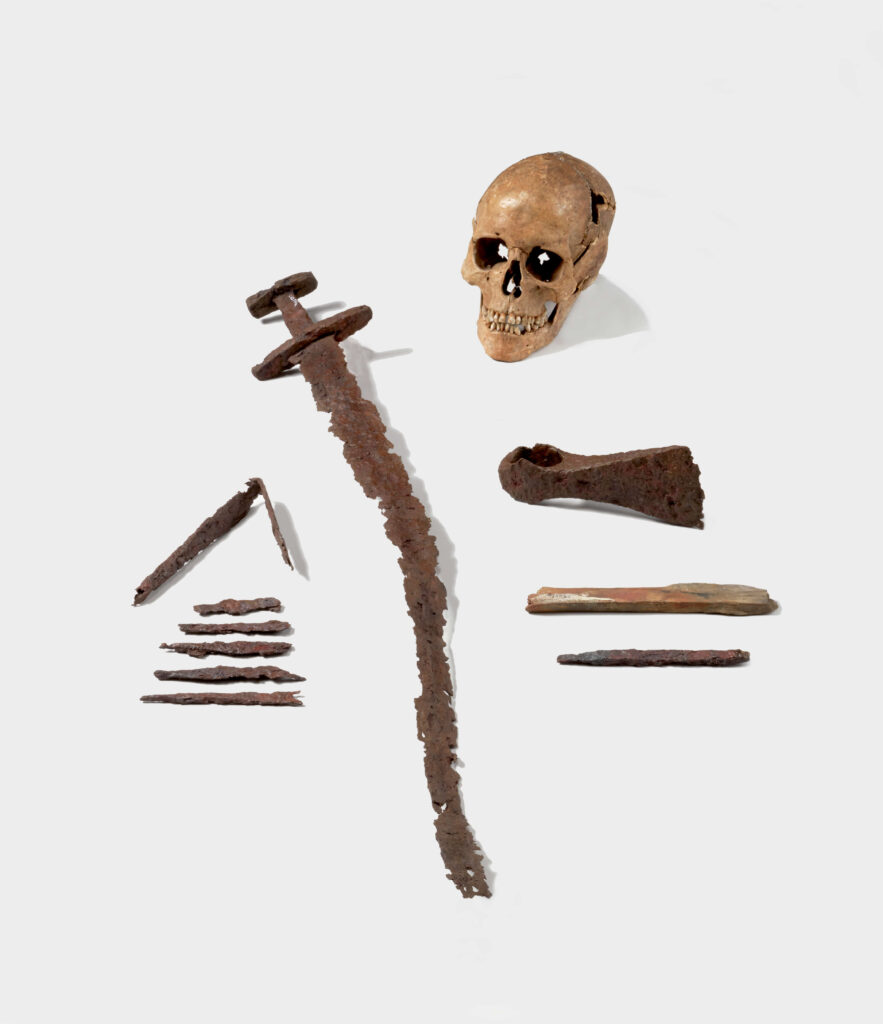 The skull and weapons found in Solør’s tomb.
Viking axe - The favorite weapon of the Vikings

The mighty warrior, who was a woman

Surprisingly, the body had been identified as that of a man for more than 70 years only because his grave contained a large arsenal of weapons: a sword, an ax, a spear, arrows, a shield, a horse, a set of hnefatafl … Everything indicated that it was not only the grave of a warrior, but of a leader . In Al-Shamahi’s words, the confusion occurred “simply because the occupier was a woman”. A DNA test conducted in 2017 revealed that the remains belonged to a woman, revealing years of sexist bias.

It is not the first time that a warrior’s grave has been attributed to a man. Recently, a DNA analysis denied a similar case in Sweden . This is the so-called Birka warrior whose tomb was found in the 19th century and had an extraordinary funerary outfit consisting of weapons.

The reconstruction of the face of this Norwegian warrior is addressed by a National Geographic documentary entitled Viking Warrior Women . In this production the arrangement of the objects in the tomb is also recreated. The woman’s remains are in the Oslo Museum of Cultural History.