The Battle of Stamford Bridge is collected in chronicles and sagas for its epic tones. Today it is considered one of the great victories in England’s military history. But, above all, it is a decisive episode in the history of the Vikings . In this article we explain the context, development and consequences of this competition.

Background: The fight for the empty throne of England

The English king Edward the Confessor died in January 1066 without heirs . In 1052 he promised William of Normandy that he would be his successor, but on his deathbed he promised his brother-in-law Harold Godwinson. On the other hand, Harold’s brother Tostig was ambitious for the crown. Faced with this situation, three candidates for the empty throne appeared:

• Harold Godwinson , Earl of Wessex and brother-in-law of Edward the Confessor. He was proclaimed king by the Witenagemot or assembly of English nobles under the name of Harold II.

• Harald III of Norway . The Norwegian monarch craved new lands and therefore was conquering the Orkney Islands, the Shetlands and the Hebrides. He agreed with Tostig Godwinson, brother of Harold II, to invade England and divide the kingdom with him. He based his claims on being a relative of the line of Danish kings who ruled England before Edward the Confessor.

• William, Duke of Normandy and cousin of Edward the Confessor. Due to the promise made by the English monarch, William gathered a mighty army and set sail for England.

The Battle of Stamford Bridge

The Battle of Stamford Bridge is a confrontation between the forces of Harold II of England and the alliance between Harald III of Norway and Tostig Godwinson. Assuming that the proclaimed Saxon king would remain in the south of the country to repel an impending attack from William of Normandy, 300 Viking ships landed in northern England on 18 September 1066.

Two days later, on September 20, they defeated a local army led by the counts Edwin of Mercia and Morcar of Northumbria at the Battle of Fulford. Then they captured York and set up camp on a plain a few miles east of the city.

Faced with this circumstance, Harold II quickly marched north to catch them off guard . And so it was: just 5 days after the Fulford clash, the Saxons reached the Norwegian camp. The battle between the two pretenders to the throne took place very close to Fulford, in the town of Stamford Bridge. It was September 25, 1066.

As we have mentioned, Harald Hardrada believed that his enemies would not abandon their positions in the south of the island in the face of the threat of a landing from Normandy. Because of this, the Nordic army was dispersed, looking for hostages and supplies. Also, that September 25th was a very hot day, so many Norsemen had left their armor and shields on the ships anchored in the River Ouse, a few miles away. A third of the Norwegian forces guarded the ships.

And so, surprisingly, Harald III spotted the Saxons approaching their camp on the opposite bank of the River Derwent. To buy time, the Norwegian sent a small detachment to block the Stamford Bridge crossing. Meanwhile, the bulk of the Viking troops were preparing to organize. 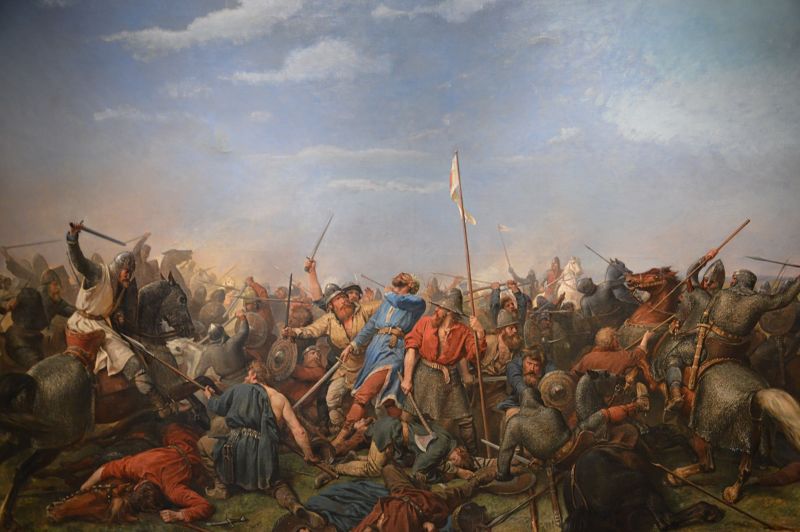 Godwinson’s army easily defeated this outpost, but the passage on the bridge was blocked by a real hero: a huge Viking over two meters high stopped the entire enemy army. Wielding a Danish ax and without any armor, the giant withstood the enemy assault for an hour. The Anglo-Saxon chronicles number 40 English who perished at the hands of this furious in an attempt to cross the bridge. Eventually, a Saxon infiltrated the bridge using a log and thrust his spear into the Viking’s groin, taking advantage of the cracks in the planks.

The anonymous hero had fallen and Harold II’s hosts managed to cross the bridge. The Norwegians had already organized and fought despite the lack of protection. They formed a shield wall that resisted for hours some British tired of the forced march they had undertaken in the previous days.

Eventually, a crush on the throat ended the life of Harald III of Norway . Before dying, a warrior asked the king if he was okay. “It’s just a little arrow, but it’s doing its job,” he replied.

Soon after, Tostig Godwinson was killed and the Vikings began to back down. By the time the devastated Vikings arrived to guard the ships, it was too late. The few survivors of the invaders fled to their ships pursued by the forces of Harold II. The victory was Saxon.

The Battle of Stamford Bridge was a resounding defeat for the Vikings. They lost the two leaders of their troops and numerous warriors. Of the 300 Norwegian ships that arrived in England to invade, only 24 sailed to Norway to escape.

In all, some 4,000 British and 6,000 Norwegians lost their lives that day. Although Harald’s son Olaf was taken prisoner, he was allowed to return home without ransom under oath never to invade England again. Interestingly, the future Olaf III of Norway would be known as the Quiet due to his pacifist policies.

Consequences: the end of an era

With the Battle of Stamford Bridge, the Vikings’ attempts to invade the British Isles are over. A few minor raids occurred later, but the Viking era in England ended in 1066.

However, the joy of victory wouldn’t last long for Harold Godwinson. Just three days after Stamford Bridge, William of Normandy landed his troops in the south of the country as planned. The English troops again forced the march to meet them from York, and no doubt this excessive wear was one of the causes of the defeat at the Battle of Hastings (October 14, 1066). After this episode, the Duke of Normandy was crowned king of England and took the name of William the Conqueror.

Paradoxically, Guillermo was a descendant of Rollón , the Viking who was appointed Duke of Normandy in exchange for defending the Frankish territory from the attacks of his compatriots.