They threw themselves into battle half naked or covered in simple animal skins. They looted and killed indiscriminately, blinded by fury . They were numb to pain and capable of superhuman things. So were the Viking berserkers , famous Nordic warriors who intimidated their enemies and even their own companions.

What is the meaning of berserk ?

There is no etymological origin commonly accepted by experts. However, a possible translation of berserk could be “bear shirt” , where berr is “bear” and serkr is a shirt-like garment. The other option considered is that berr is equivalent to “naked”, so we could understand this word as ” shirtless ” or “shirtless”.

History of the Berserkers

The berserker Vikings are present in the essays and poems. For example, they are said to always accompany Harald Beautiful Hair (unifier and first king of Norway). Ancient Norse texts describe them as follows: “They were without chain mail and behaved like mad dogs and wolves.”

Many Norse kings had a personal guard made up of berserkers . They formed the hird or retinue of the monarch. There are documents that members of the Varangian guard (personal guard of the emperor of Byzantium) performed rites disguised as masks and animal skins.

To trace the origin of the berserk figure, we can go back to the first century BC Julius Caesar himself left testimony in his work De bello Gallico of the existence of Germanic warriors who went into battle bare-chested, with their faces painted and howling wildly. This attitude was called Teutonic anger  by the Romans. As we know, the Vikings are a Germanic people. 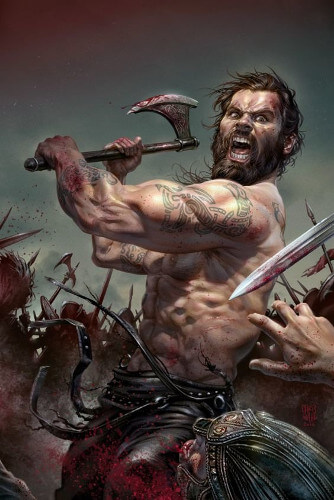 Undoubtedly, the unpredictable and dangerous attitude of these fighters caused them many problems. Socially they were considered insane and there were urban legends about metamorphosis into wolves. In Christian times it was believed that berserkers believed they were possessed by the devil . Like so many pagan traditions, their days were numbered.

In 1015, the Norwegian jarl Eiríkr Hákonarson outlawed the berserkers . This resolution was later imitated by Icelandic law (the gragas), and by the 12th century the berserkers had already disappeared . By that time they had already left a lasting mark both in opera and in history.

Why were the Viking berserkers so ferocious?

Much has been speculated about the proverbial ferocity of the berserk . The most popular theory is that they consumed hallucinogenic mushrooms , such as fly agaric . The use of plants and fungi to enter a trance is a millennial practice present in many cultures, so it is not far-fetched.

Another possible source of this courage was the consumption of black henbane, a hallucinogenic plant. There is also speculation about beer contaminated with ergot, a fungus with lysergic acid compounds.

Other theories on berserkers

However, other scholars attribute this behavior to post-traumatic stress disorder hysteria . This disorder is common in war veterans and can trigger outbursts of anger. Recall that, in a trance state, these men did not distinguish between allies and enemies. Therefore, their comrades kept a safe distance from them.

The fury felt by the berserkers is known as the berserkergang . It happened not only in the heat of the battle, but also in everyday life. These warriors were capable of things impossible for normal men. For example, they walked over fire and swallowed glowing embers without showing pain . They also cut themselves with cuts before the battle. There is evidence of a case in which some of these warriors jumped into the water prematurely from a Viking ship , and perished by drowning.

The bersekergang started with chills, chattering teeth and shaking. Afterwards, the face swelled and turned purple. The head was getting very hot and soon the berserk was howling like an animal and destroying everything when it was within reach. However, when this trance passed, the warriors experienced a great dullness of mind and remained weak for one or more days.

Figure of a berserker as a Lewis chess tower. This Nordic-made game was found in the Hebridean Islands (Scotland)

In the oldest Norse tradition, there were three animals worshiped: the bear, the wolf and the boar. These are the three types of berserkers we can find.

Although the berserk is the best known elite Viking warrior, they are actually only one of three types of these ferocious fighters.

They screamed like wild beasts, foaming at their mouths and gnawing on the iron structure of their shields . His appearance caused panic in the enemy ranks.

As we have already mentioned, the berserkers wore bear skins. Additionally, their bodies rested on bear skins when they were cremated. These warriors probably worshiped a type of bear.

The úlfhéðnar (singular,  úlfhéðinn ) were berserkers who covered themselves with wolf pelts. and they carried a spear . They acted like crazy, chewing on their shields and ignoring the pain.

It was said that they were the elite warriors of Odin and are mentioned in the sagas as  Vatnsdœla , Hrafnsmál and Volsunga . For a more precise description, we can save this fragment of the Haraldskvæði poem , belonging to Hrafnsmál :

I
‘m going to talk about the berserkers, the blood tasters, those fearless heroes, how did they treat
those who waded in battle?
Wolf skin they call them.
They carry bloody shields.
Their spears have red heads when they march.
They form a compact group, closing ranks.
The prince, in his wisdom, trusts them,
those who cut off enemy shields.

For the Viking mythology , the boar was a sacred animal of the Vanir. For example, the god Freyr owned the boar Gullinburstiand, while Freya owned Hildsvíni.

Boar warriors fought atop a formation known as svinfylking (“boar’s head”) . This formation was wedge-shaped and two warriors formed the frog or snout. The warriors svinfylking were defined masters of disguise and showed great knowledge of the terrain. 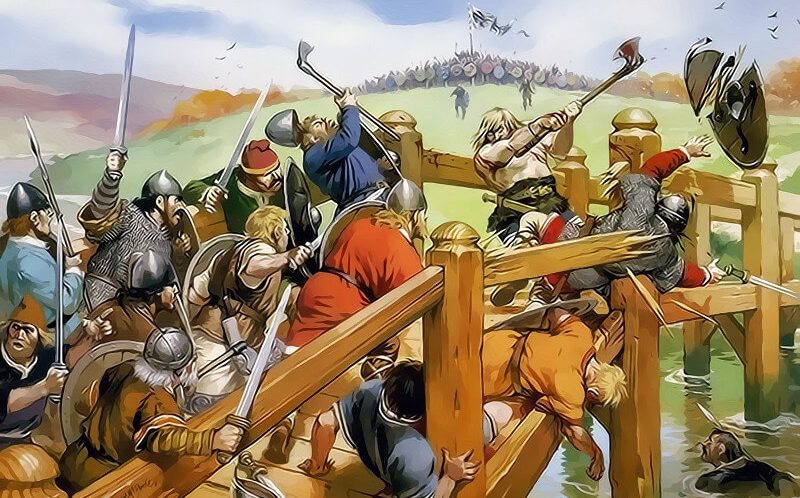 Berserk at the Battle of Stamford Bridge

Norse sagas mention various berserkers , who usually accompanied a king to protect him. They are sometimes credited with supernatural abilities, such as Bödvar Bjarki, who could turn into a bear . He was one of twelve berserkers who made up Hrolf Kraki ‘s hird .

Another famous berserk is  Egil Skallagrimmson , a violent skald of the 11th century. Although, without a doubt, the furious who has transcended the most in history is the hero of the battle of Stamford Bridge . A warrior over 2 meters tall in the service of King Harald climbed a bridge and blocked the entire Saxon army, killing dozens of enemies. He was armed with a Danish ax and without any armor. The Vikings lost that battle and the furious was killed, but his feat has not been forgotten.