A longboat crosses the estuary from the sea and approaches the Galician coast. Screaming Normans come out of the ship armed to the teeth. This scene could take place in Galicia over a thousand years ago… or be another edition of the Catoira Viking festival. Every year the inhabitants of this town of Pontevedra remember how the ranks of the Viking leader Ulfo were rejected by the local troops, led by Bishop Cresconio.

What is the Viking festival of Catoira?

This festival represents the Viking attacks that occurred more than a millennium ago on the Galician coast. As we explained in our article on the Vikings in Spain , the Scandinavians undertook various forays into the Iberian Peninsula between the 9th and 10th centuries .

The Viking pilgrimage of Catoira has been practiced since 1960. The inhabitants of this town of Pontevedra dress up as Nordic warriors and organize a landing on the coast of the city. It was declared a Festival of National Tourist Interest in 1988. The celebration crossed borders and in 2002 it was also declared a Festival of International Tourist Interest.

Where and when is the Viking festival of Catoira celebrated?

The Viking pilgrimage of Catoira takes place on the first Sunday of August . In other words, the Catoira Viking Festival 2018 is celebrated on 5 August. It brings together more than 25,000 visitors.

Catoira is a town of about 3,500 inhabitants located on the coast of Pontevedra . This municipality is twinned with the Danish city of Frederikssund, a town with a great Viking tradition. The festival is a magnificent occasion for cultural exchange, as well as an example of historical reconciliation.

The emblematic place that serves as the stage for the Viking landing of Catoira are the Torres del Oeste . These are the remains of a fortified complex that defended the Ulla River from the incursions of Scandinavian and Saracen pirates. It should be explained that this was the river access to Santiago de Compostela, whose treasures were coveted by pirates. In fact, Galicia was known to the Norsemen as Jakobsland.

Viking axe - The favorite weapon of the Vikings 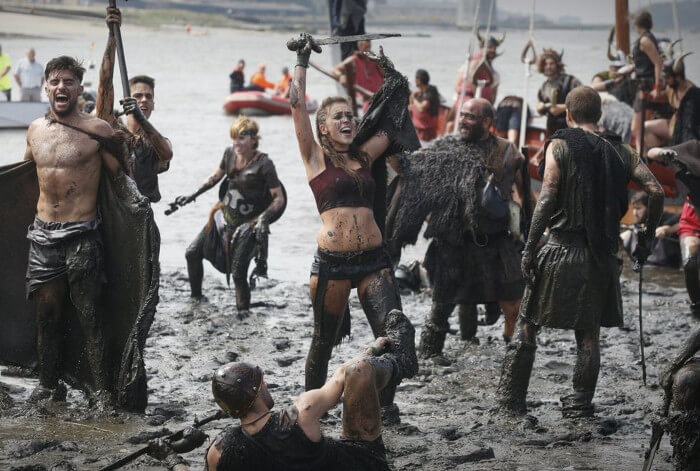 How does the Catoira Viking pilgrimage take place?

The week before the Catoira Viking festival hosts various cultural activities. Representation of Viking-themed plays, musical concerts, literary presentations, etc. The first important day of this celebration is the first Saturday of August. It is Saturday night when Catoira’s Viking dinner takes place . At around 10 pm and next to the Torres del Oeste, the municipality organizes a hearty dinner. To participate you must dress up as a Viking and purchase a pass.

Sunday is the unmissable event. At 10 am parade from the center of Catoira to Torres del Oeste. There is a medieval market where you can buy Galician handicrafts and gastronomy . Pilgrimage participants are presented in the shadow of the Towers with local wine and mussels.

Shortly after, around 1pm, the most important moment arrives: the Viking landing of Catoira . A 17.5 meter long replica of a longship arrives across the estuary commanded by dozens of disguised Viking warriors. The boat reaches the coast and its crew jumps ashore screaming. Then there is a simulated battle between the invaders and defenders of the city, in which wine flows in abundance.

Vikings: the creator of the series plays the mystery with the appearance of Rollo

Afterwards, everyone takes part in a gathering meal. Octopuses, empanadas and sardines are the protagonists of the banquet, with bagpipe music in the background . The party continues until late at night with theatrical performances, workshops and musical performances.