How we greet the deceased says a lot about our society and culture. In the case of the Viking funeral we can find religious symbolism, manifestations of social status, reflections of customs and habits, etc. The sagas, chronicles and archaeological remains tell us what Scandinavian funerary practices were like in the Middle Ages.

The ancient Norsemen had two ways of celebrating a funeral: cremating one’s dead or burying them. The choice of one or the other method depended on the customs of each region (in Denmark, for example, burial was more common). The spread of Christianity helped to make burial more and more common , so much so that towards the end of the Viking age this was the predominant method for carrying out funerals.

On the other hand, the status and purchasing power of the deceased were also a determining issue in the preparation of the funeral. Next, we will explain in a little more detail the types of Viking funerals that existed.

The image that comes to mind when talking about a Viking funeral is that of a ship on fire. However, this funeral practice was only available to a very few. After all, a ship was very valuable and also a symbol of wealth. Viking leaders and the wealthiest could afford to be cremated in one of their ships.

The ship could be burned to the ground like a pyre by means of a torch or it could also be pushed into the sea and launched with fire arrows. In the latter form, it drifted as it was consumed by flames.

The body of the deceased was placed on the deck of the ship, surrounded by his trousseau as well as by the offerings and sacrifices made by those close to him. The boat was doused with oil or other incendiary material to facilitate cremation.

The less affluent Vikings , on the other hand, were cremated on funeral pyres . The ashes could be scattered or buried, marking the place with a mound or a commemorative plaque.

It is interesting a testimony of a Rus or Viking of the East collected by the Arab chronicler Ahmad ibn Fadlan :

You Arabs are crazy. You put the men you love most and the noblest among you underground, and the earth, worms and insects eat them. But we burn them in an instant, so that without delay they enter heaven.

Burial is the other type of Viking funeral we know of. And, in fact, the burials have been a great source of information for archaeologists and historians for the best preservation of the remains.

The wealthiest Norwegians were buried in funeral boats, vessels from which the mast, figureheads and other prominent parts were removed so that they did not protrude. Sometimes these ships were built on purpose, while others were actual ships that belonged to the deceased. A grave large enough to bury the ship was dug, on whose deck the body was placed surrounded by cremated ship-style burial items. Then everything was covered with stones and poured over the earth, sometimes forming a heap. 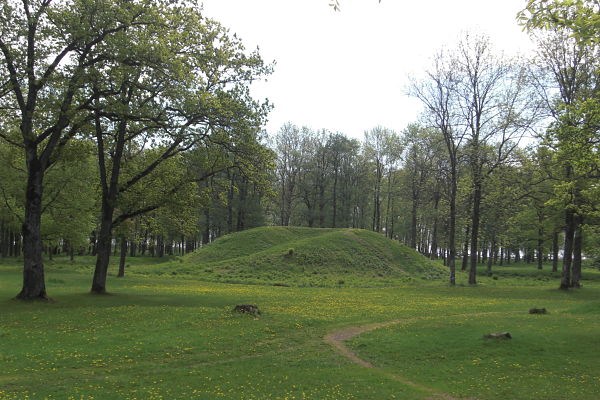 Mound in the Viking cemetery of Borre (Norway).

Numerous burial mounds have been found in the territories under Viking influence in honor of Nordic kings and leaders. In addition, the deceased were honored by funerary monuments such as many runestones. Some Viking burial mounds are Borre (Norway), Jelling and Lindholm Høje (Denmark). Some mounds reach 45 meters in diameter and 6 meters in height.

There was also the option of the so-called stone boats , which are an arrangement of rocks that simulate the silhouette of a ship around the place where the tomb was excavated.

As noted in the tombs found, the Free Nordics were buried with important possessions . For example, the bodies of warriors carry weapons, tools of craftsmen and women’s jewelry or household items. 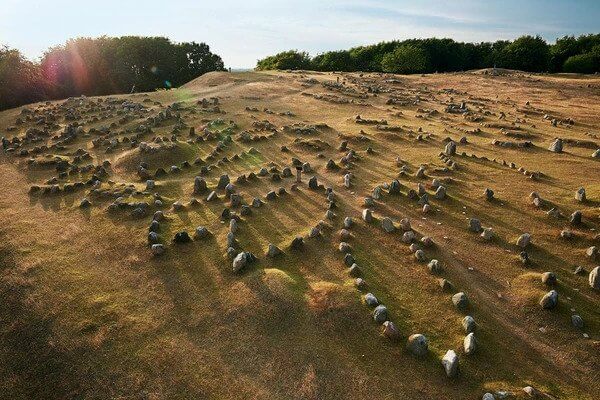 The slave or slaves of the Vikings were much more modest funeral. He dug into the earth to dispose of his body in a dignified enough way that they would not return to disturb their masters. Slaves were sometimes sacrificed to serve their owners in the afterlife, and for them their skeletons were found in the most important Viking tombs.

What was the funeral rite of the Vikings like

The ancient Scandinavians believed in the afterlife, and they were also a particularly superstitious people. For this reason, the Viking funeral had to be celebrated correctly so that the deceased could maintain the status he had achieved in life and find his way to the afterlife. A badly executed ceremony could, according to the beliefs of the time, make the deceased become a soul condemned to wander forever.

Present in numerous tombs and memorial stones, the ship was a symbol of the journey to the afterlife . Some scholars argue that horses sacrificed and deposited in funeral boats fulfilled this same function as a means of transport.

The Vikings used to leave gifts next to the corpse , even if it was burned. The number and value of these offerings depended on the social position of the deceased. For example, for top leaders, slaves could be massacred. Among the grave goods objects such as weapons, jewels, tools, carts, sledges, boats, food and drink were found. Even bodies of horses, dogs, cows and other animals.

To celebrate a Viking funeral, animals were sacrificed with which a feast was offered. On the seventh day after the death of the deceased, the sjaund took place  . This celebration included libations of a funeral beer. Only after this rite could the heirs of the deceased be able to claim their share of the inheritance.

Various Arab chronicles tell us about the funerals of the Rus or the Eastern Vikings, in which slaves were sacrificed to accompany their masters . For example, Al-Istajri says: “The Rus are a people who burn their own dead. Young slaves are burned with the rich of their own free will.

Ibn Fadlan, for his part, offers a shocking account of the funeral of a great man. They left his body in a temporary grave for ten days, during which time a suit was woven for him. After completing this garment, they dug up the body and clothed it, and a slave girl volunteered to be sacrificed. The men close to the dead man had sex with the girl, and when they finished they told her “Tell your master I did it just for his sake.”

The owner’s body was placed in a tent on the deck of a ship, placed on a wooden pyre. Food and drink were deposited, as well as the carcasses of sacrificed animals (a dog, two horses, a rooster and a hen). The men then led the slave to a kind of door frame they had built. They lifted her three times by her feet on the palms of her hands, so that she could see beyond the frame. Each time, the young woman told what she saw: the first time, to her parents; the second, to all his relatives; the third, to his master in heaven, surrounded by young people and telling him to go with him.

It was then that the men took the slave girl to the ship, where she took off the bracelets and rings she was wearing and gave them to an old woman whom they called the “Angel of Death”. This woman (“a sinister witch with a large body”) laid down the grave goods and was allegedly assigned to kill the young woman. They gave the slave alcoholic beverages to drink, which then entered the shop. While the attendees made noise by hitting their shields with batons, six men entered the shop one after another and had sex with her. Then two of them took her by the feet and two by the hands. The old woman wrapped a rope around her neck, and as the other two men pulled the rope to strangle her, she stuck a dagger into his side.
Viking festival of Catoira

Finally, the male closest to the deceased undressed and came back with a torch in his hand, with which he lit the wooden pyre on which the ship was placed. The helpers took a stick and lit it on the pyre, throwing it back into the wood to spread the fire. In this way everything was reduced to ashes.

Glima, the martial art of the Vikings