The horned helmet is one of the main symbols of the Viking world, although in reality Viking helmets did not wear horns . So what were these helmets like and where did this misunderstanding come from? This is what we will explain in this article.

The original Viking helmets were made of iron plates joined by strips of leather. These helmets were simple, rounded or conical in shape . In addition, they often featured nose and eye protectors.

On the other hand, leather helmets and fur belts were also made , much more common than iron ones. These protections were intended for warriors who could not afford a metal helmet. Recall that the Vikings did not have professional soldiers but that every warrior supported himself.

Some hypotheses suggest that, unlike other Viking items or weapons , helmets were inherited from generation to generation. This would explain the scarcity of helmets in the graves.

A magnificent example of these face shields is found in Gjermundbu’s helmet, the only complete Viking helmet found to date. This object was found in a cairn near a Norwegian farm in 1943.

It was fragmented into nine parts, but could be completely rebuilt. Along with the helmet of Gjermundbu, typical objects of a rich warrior were found: three swords, spear points, axes, equestrian accessories, rivets for shields and a chain mail and rings.

Today, the entire collection of objects is on display in the Oslo History Museum. 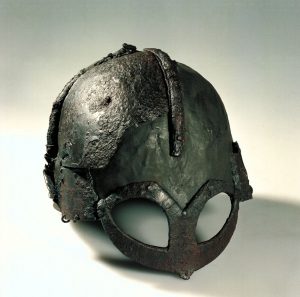 Other authentic Viking helmets found in the excavations and noteworthy are:

Vikings: the most difficult ending to decide according to the creator of the series

Given the scarcity of full helmets, runes descriptions and Viking-era illustrations tell us what these protections were like. Viking helmets were simple, sometimes with the metal strip to protect the nose or the “glasses” to cover the eyes.

The myth of the horned Viking helmet

In popular culture of the past two centuries, it is accepted that Viking helmets were adorned with horns. One might think that this misunderstanding is the result of the demonization of this Nordic people by the victims of the Viking attacks in the Middle Ages. However, this historical inaccuracy has its origin in Romanticism, during the 19th century.

Primarily, we have to “blame” the 1820 illustrations by the Swedish painter Gustav Malmström. In a series of paintings that sought to capture the epic poem The Saga of Frithiof , the artist decided to dress them in the famous horned helmets. The painter’s intention was to demonize them, offering an idealized image of reality as desired by romanticism. 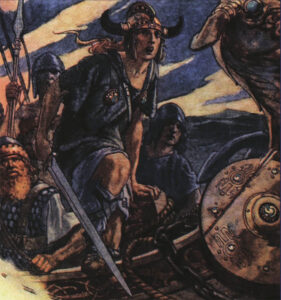 Illustration from the Frithiof Saga.

Decades later, Richard Wagner ‘s work The Ring of the Nibelung would put its grain of sand. In 1876 this work was performed for the first time, in which the choir appeared characterized by horned and winged helmets .

Already in mass culture, phenomena such as Vicky the Viking or the comic  Olafo el Amargado ( Hägar the Horrible , in the original) have finished consolidating the myth. 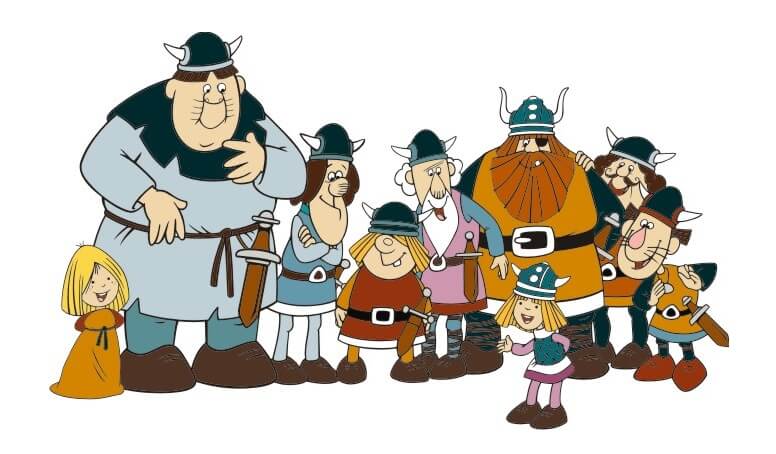 Why did the Viking helmet not have horns?

The absence of evidence speaks for itself, but there is a compelling reason to rule out this decoration on Viking helmets. It would n’t be practical to fight with that helmet, especially on shield walls . Fighting shoulder to shoulder while stumbling constantly is not something that fits the pragmatic battle philosophy of this ancient civilization.

In any case, after centuries of looting and barbarism, we can say that the Vikings have earned fame with their own hands. They left a deep mark and it is no surprise that they ended up being demonized.