The Viking Ship Museum in Oslo displays the best preserved Viking ships in the world. It is an unmissable event if you visit the Norwegian capital. We stayed at  Vikingskipshuset last week so we can describe how it is.

What is the Viking Ship Museum in Oslo like?

Today, Oslo’s Viking Ship Museum exhibits three wooden ships that were buried as funeral ships between the 9th and 10th centuries . And also the kit of one of these boats. The museum is in the shape of a cross, reserving one arm for each ship and the fourth for the objects found inside.

The oldest of the ships in the Viking Ship Museum in Oslo was built around 820 . It was found on the Oseberg farm, near Tønsberg (south of Oslo) in 1903, under a burial mound. Due to its characteristics, it is believed that this boat was not designed for long journeys.

The boat is built with oak wood, with dimensions of  22 meters long by 5 meters wide . Its hull is made up of 12 courses of planking or wooden plates joined with iron rivets. The rudder is located aft, starboard (starboard side). The upper course has 15 holes on each side for inserting the oars. Interestingly, this ship has no benches – the crew sat on their trunks to row. A full set of oars was included in the tomb.

In addition to being rowed, Oseberg’s boat could also sail: it had a sail of about 90 square meters that allowed it to reach a speed of over 10 knots . When the sail was unfolded, the oars were placed on four shelves placed above the railing. Although no shields were found on the burial mound, the Vikings could hang their shields outside, above the railing.

Not only is it large in size, it is also decorated with delicate carvings . In fact, it is the most lavishly decorated Viking ship ever found. 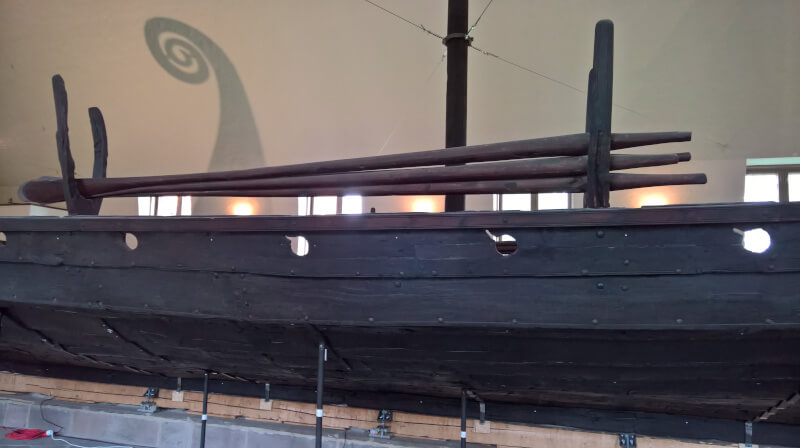 Oars of the Oseberg boat 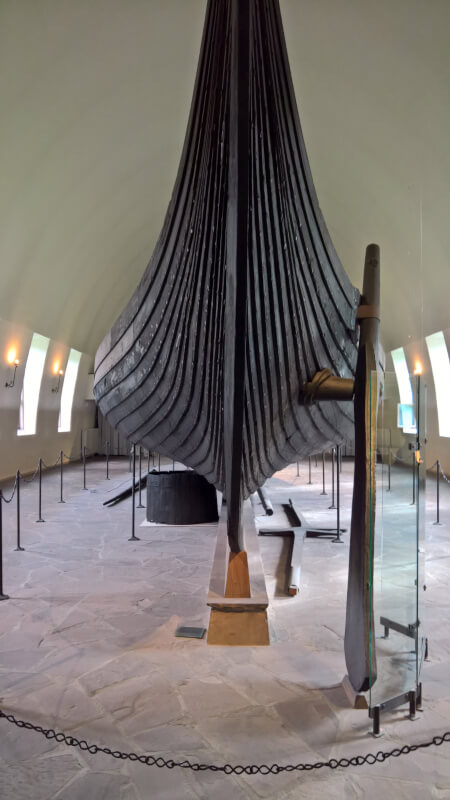 The Oseberg ship seen from the stern.

Who was buried in the Oseberg ship?

Like the other ships on display in the museum, the Oseberg remained in operation up to when, in 834, was used to bury two powerful women . Their bodies were placed inside a burial chamber in the center of the ship. Analyzing the remains, the experts assure that it is:

• A woman in her fifties , about 153 centimeters tall. He has healthy teeth with little wear, which suggests he had a good diet and used a toothpick. On the other hand, it appears that he broke a collarbone a few weeks before his death, although the true cause of death is unknown.

• A woman of about 70-80 years , with a height of about 153 centimeters. The skeleton shows signs that she was seriously ill during her childhood. Already in old age he suffered from osteoporosis: one perceives, among other diseases, a lumbar fracture and a knee injury. As a result, in his later years he probably had to walk hunched over with the help of a cane. To this must be added an advanced cancer which would cause him great pain.

We know that they were important characters not only for the fact that they were buried in a boat (which is no small feat), but also for the rich funerary equipment that accompanies them: a wooden cart, three elaborately made sleds, five beds, five columns surmounted for carved animal heads, fifteen horses, six dogs and two cows. A good part of this collection is exhibited in the museum.

Although, on the other hand, archaeologists have a question: was the tomb intended for both women? Or was one of them sacrificed to accompany the other to the afterlife? 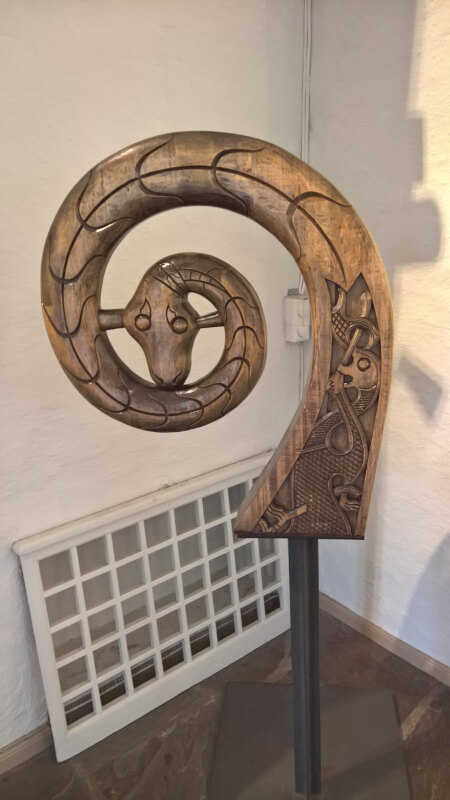 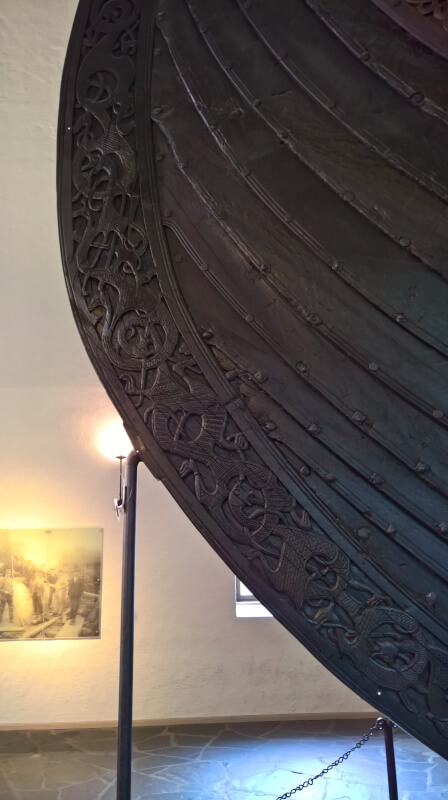 Sculpted on the Oseberg ship.

The ship of Gokstad

Built from oak around 890, the Gokstad ship was suitable for open sea voyages . It is the largest ship in the museum, measuring 24 meters long by 5 meters wide . It was found on Gokstad’s farm in Sandar (south of Oslo) in 1880.

This boat was prepared for trips to Iceland. It is stronger and taller than the Oseberg, with a 110 m² sail and a top speed of over 12 knots. It provided room for 32 rowers. The holes for the oars were covered with wooden lids.

Remains of many shields were found hanging from the ship’s railing. Both these shields and other parts of the ship were painted in yellow and black. 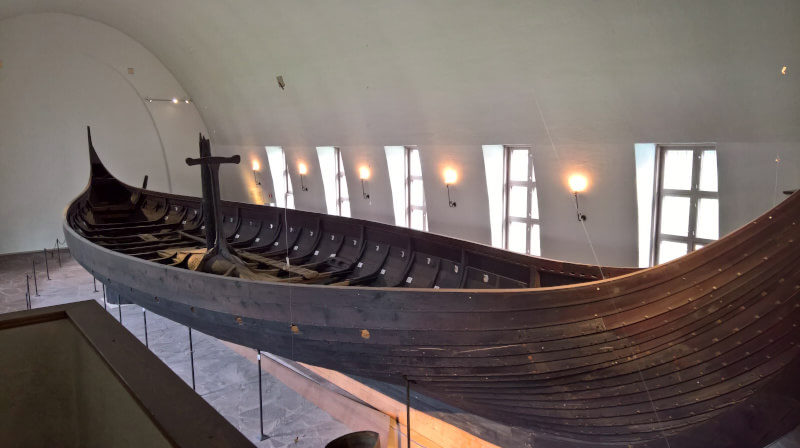 Who was buried in the Gokstad ship?

It seems clear that the Gokstad Ship was used for a few years by a local chief who was buried around 900. He was a tall, stout man who died in battle at the age of 40-50 . The marks on his skeleton reveal the causes of his death.

We found an oblique cut on the left knee, a powerful gash in the right calf and a stab in the right thigh. When fighting with shields, sword strikes were aimed at the legs. This warrior was probably fighting two or more enemies at the same time . There are no signs of healing in the wounds, so he died instantly.

This man must have been very rich and powerful , and the objects found in the tomb are proof of this. Three boats, six beds, a sleigh, kitchen utensils, a board game with its pawns, 64 shields, eight dogs, two goshawks and two peacocks. Unfortunately, the tomb was looted a few decades after the burial, so no jewelry or weapons were found. 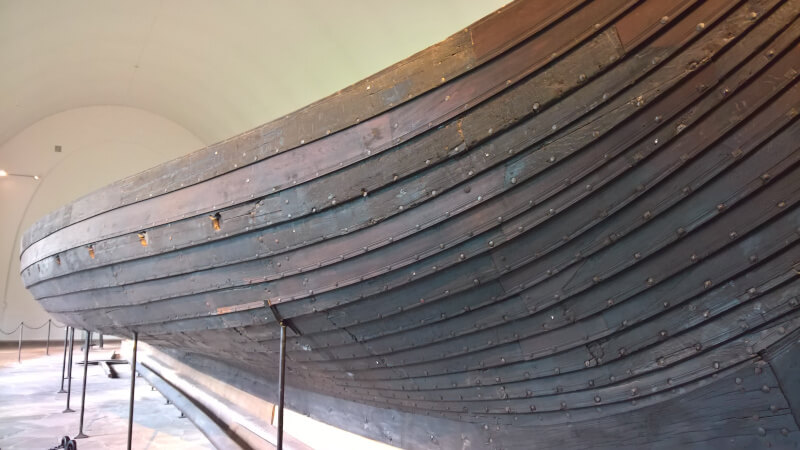 Tracas from the Gokstad ship

Paradoxically, the most modern Viking funeral ship found in Norway is not as well preserved as the others. It is dated to the year 900, it was used for a few years before being buried in 910. It was excavated in 1867 at the Haugen farm in Rolvsøy (south of Oslo).

It measures 18 meters long by 4 meters wide . Sturdy and solid, it held up to 12 pairs of oars and sailed on the open sea. A wool caulking was found between the planks which made the boat watertight. 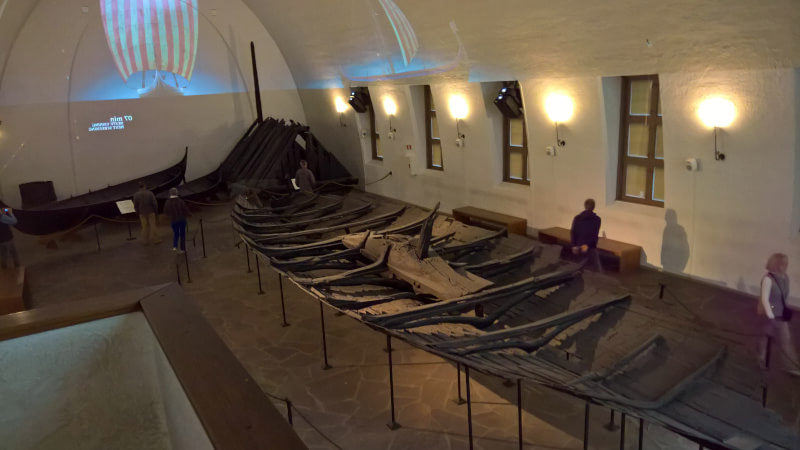 Who was buried in the Ship of Tune?

A wooden burial chamber was found on the ship of Tune with a few objects in poor condition: a sword, a shield, a chain mail, some horses, parts of a ski. None of this is preserved today, but it indicates that it was the grave of a rich man. Nor have any human remains been found. 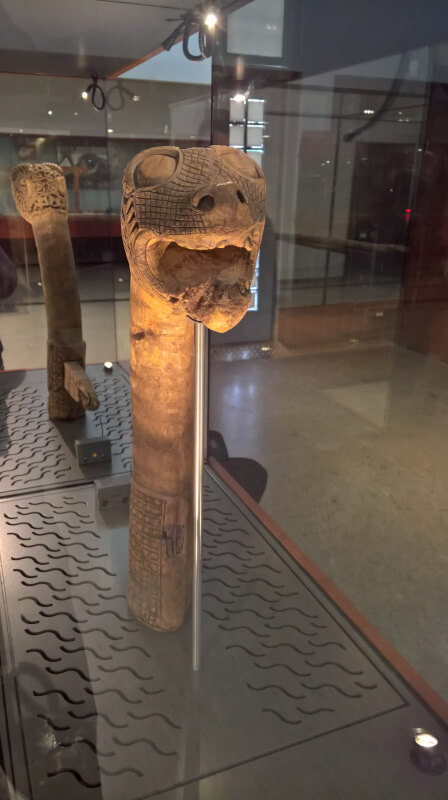 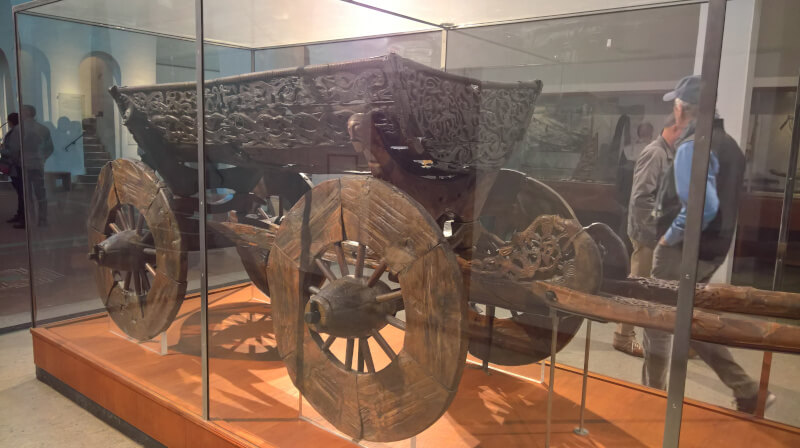 The Viking Ship Museum in Oslo houses a shop at the entrance. A major expansion of the museum is planned for the next few years to transform it into a Viking Age center. In fact, once the works are finished, it will probably be renamed the Viking Age Museum. 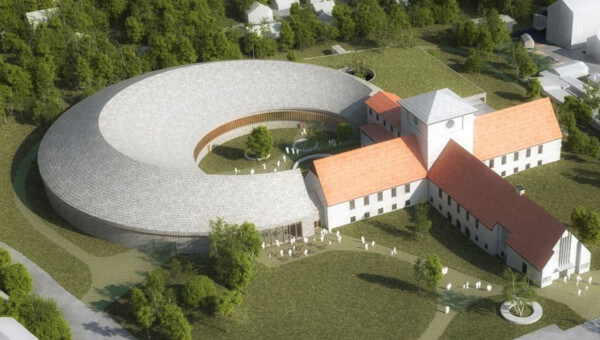 Expansion project for the Viking Ship Museum in Oslo

How to get to the Vikingskipshuset

The  Vikingskipshuset is located on the Bygdøy peninsula. Using public transport, you can access this part of Oslo in two ways:

• With a ferry that leaves from the port of the city (just behind the Town Hall). It works between May and October.

In Bygdøy there are also other museums:

• Kon-Tiki Museum , dedicated to the ethnographer Thor Heyerdahl and his incredible expeditions around the world. It houses the famous raft with which Heyerdahl and his team traveled from Peru to Tahiti, as well as other ships.

• Fram Museum , which deals with expeditions to the poles. Its main attractions are the Fram and Gjøa boats, used by Roald Amundsen.

• Norwegian Maritime Museum , which traces the naval history of the Nordic country.

• Museum of the Norwegian People , an open-air museum that includes houses from different regions and periods of Norway.

Opening hours and tickets for the Viking Museum in Oslo

Regarding the price of tickets, we can find different rates:

Ahmad Ibn Fadlan and his chronicle of the Volga Vikings

The ticket also includes a visit to the Historical Museum,  located in the city center. Plus, it’s free with the Oslo Pass.