The arrival of the Vikings in America is one of its greatest milestones but at the same time one of the episodes we know less about . The information we have received on the attempted colonization of the American continent is rather scarce. In this article we will talk about when the Scandinavians arrived in the “New World” and how it went.

When and how did the Vikings come to America?

Let’s start by making it clear that when we talk about America in this article we are referring to the continent. The expansion of the Scandinavians to the west was followed by the island territories until reaching Greenland . As we explained in our article on Vikings in Greenland , this island has been explored by Erik the Red since the year 982. The wonders with which this Norwegian described the “Green Land” fascinated half a thousand Icelanders, who set sail for the Greenland three years. after.

The colony was prosperous for a time thanks to the hunting of walrus and narwhal ivory, a material highly valued in Europe for making jewelry. However, the Scandinavians in Greenland were forced to import elementary raw materials such as wood and iron . This situation motivated the search for more lands to the west. 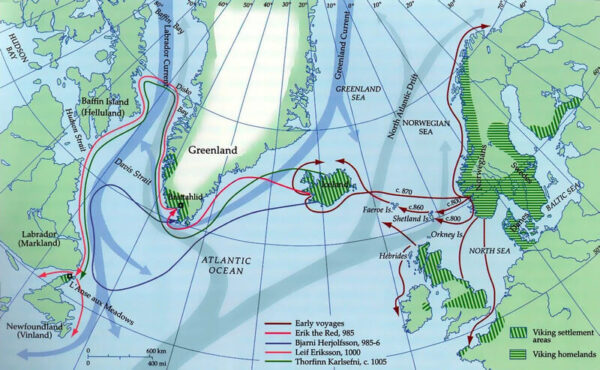 America was the next step in Scandinavian expansion into the western Atlantic. But in what year did the Vikings arrive in America? Leif Eriksson, son of Erik the Red, arrived in the New World around the year 1000 . The sagas do not specify the exact date, although they indicate it was in the fall.

The first person to be counted in the history of Viking expeditions to the American continent is Bjarni Herjólfsson. This Icelandic merchant was part of a large convoy of emigrants to Greenland in 986. His ship was lost and veered west , where he sailed for three days. He glimpsed wooded lands , but drove his  knarr east without going anywhere to explore them and finally reached Greenland. Herjólfsson told this story to our next protagonist, Leif Eriksson.

Leif Eriksson had heard the stories of Bjarni Herjólfsson and took a chance to look for around the year 1000. He bought the Icelandic merchant the same ship which had seen those remote lands , took a crew of 35 men and took the sea. The truth is that his father, the legendary Red Erik who founded the Greenlandic colony, would have accompanied him. However, on the way to the ship he fell from his horse and refused to make the journey, interpreting it as a bad omen.

Finally, he continued to sail for two days and discovered a green land, rich in salmon and with “fields of wheat and vines that grew by themselves” , in his own words. He spent the winter in the land he called Vinland, “the land of vineyards” (the island of Newfoundland?). He divided his crew into two groups, so that while some built a small camp, others explored the surroundings.

In the spring he returned to Greenland with a load of grapes and wood, and on the way saved two men shipwrecked in America, earning the nickname of Lucky Leif. 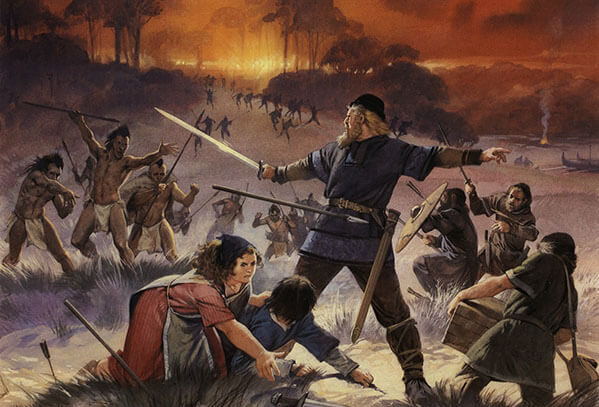 Leif Eriksson’s successful journey motivated other Norwegians to approach American lands. Although there is not much evidence in this regard, it can be assumed that there have been several supply trips from Greenland to Vinland in search of timber, fodder and trade with the indigenous population.

Thorvald Eriksson, Erik’s brother, was the first European to have contact with the Amerindians… and also the first to die in America. In the year 1004 he spent the winter together with 30 men in the Leif camp. The following spring there was a confrontation with nine indigenous people for unclear reasons . Eight of them died, but the ninth managed to escape and return with a large contingent of natives who pursued the Vikings and killed their leader Thorvald with an arrow.

The last of the proper names we will mention is Thorfinn Karsefni, nicknamed “the Brave”. In 1009, he led a three ship colonization project with between 160 and 250 men and women who landed in Vinland.

This Scandinavian community spent a harsh winter in a fjord, surviving fishing, hunting and egg-gathering. They then sailed to the island of Hop, where they managed to maintain peaceful relations with the indigenous peoples for a time . They traded with them to obtain animal skins in exchange for milk and cloth. In the sagas we find a description of these natives: They were short in stature, with menacing features and tousled hair on their heads. His eyes were large and his cheeks wide.

But the quiet wouldn’t last long. An escaped Karlsefni bull went through the forest and frightened some Indians, who fled in terror. Three days later, a large force of indigenous people attacked the camp . The battle resulted in the deaths of “many of the natives” and two of the Norwegians.

Balder, the Viking god of light

Seeing that the settlers would be constantly threatened by attacks from the natives, the Scandinavians decided to return to Greenland after three years in Vinland . Karlsefni’s was the first and last attempt by the Vikings to colonize America. Supply trips may have been made to bring firewood to Greenland in the following centuries, although we have no evidence of this. What is clear is that it will be nearly 500 years before other Europeans repeat the feat of colonizing the American continent. 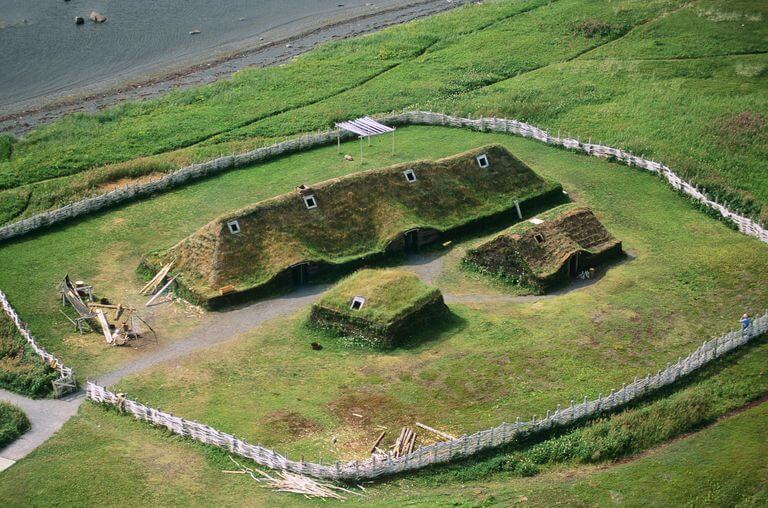 The Saga of Erik the Red and the Saga of the Greenlanders tell us about the adventures of the Vikings in America. Moreover, Vinland is mentioned in historical sources as the Book of Icelanders of Ari Þorgilsson (XII century) and chronicles of Adam of Bremen (eleventh century). In addition to these texts, we have other evidence of the arrival of the Vikings in America.

As far as we know, the region explored by these Scandinavians is located in the eastern part of present-day Canada. The Vikings distinguished three regions: Vinland, Markland and Helluland.

Historians have located The Land of Vineyards on Baffin Island. An investigation conducted in the early 1960s identified a Viking settlement in L’Anse aux Meadows . It could be Leif Eriksson’s original camp known as Leifsbudir.

On the other hand, the  Erik the Red Saga mentions two other settlements in Vinland: Straumfjðr r , which is the fjord where Thorfinn Karsefni landed; and the island of Hóp, further south, where his expedition later settled.

The “Land of the Woods”, which historians place in the Labrador peninsula, has never hosted Viking settlements. However, it seems likely that the Norwegians came to this region to collect wood.

Although Helluland was the first region Leif Eriksson visited, the “Land of Flat Stones” was also not the scene of permanent Scandinavian encampments. The sagas, in fact, describe this area as uninhabitable.

Evidence of the presence of Vikings in America

• Archaeological finds . The only place where evidence of a Viking presence in America has been found is L’Anse aux Meadows. This settlement, in the north of the island of Newfoundland, consists of (at least) eight buildings: three houses, three warehouses, a sawmill and a forge. It has been declared a World Heritage Site by UNESCO.

• Nordic sagas . The Saga of the Greenlanders (written around 1200) and the Saga of Erik the Red (1260) tell the adventures of the Vikings in America. It should be noted that these texts mix reality and fiction.

• Amerindian genes in Iceland . DNA analysis in Iceland showed the existence of a typical Native American and East Asian lineage on the island. About 80 people from four families carry these genes. In 2010, some experts concluded that this genetic lineage came from a Native American woman brought by the Vikings. Iceland became virtually isolated from the 10th century onwards and these families are known to have descended from four relatives who lived in Iceland in the 17th century.

Why did the Vikings give up on America?

Surprisingly, Nordic society at the time did not attach much importance to finding land further west. This does not mean that the news did not reach the ears of the German chronicler Adam of Bremen, for example. Interestingly, Christopher Columbus claims in a letter that he visited Iceland in 1477 . Would the Genoese listen to stories of lands on the other side of the Atlantic Ocean?

Dwelling on the causes that experts consider to explain the short stays of the Vikings in America, we can highlight:

• The hostility of the natives . The Vikings failed to maintain cordial relations with the so-called skrælings , nor did they have enough troops to defend a camp.

• Ignorance of the continent. Apparently, the Vikings did not explore territories further south than Vinland, Markland and Hellulland. Therefore, they were unaware of the enormity of the American continent and that there was much more habitable land.

• The abandonment of Greenland . The main purpose of crossing the Davis Strait was to obtain resources for Greenland. However, this colony ended up being isolated from Scandinavia and succumbed over the centuries.

Viking symbols and their meanings

• The cooling of the climate . After a few centuries of mild temperatures, the Little Ice Age arrived around 1300. The northern waters froze and navigation became much more difficult.