One of the best known Viking colonies was Greenland. This gigantic island of America was populated by the Norsemen for 500 years until it was suddenly abandoned . Let’s learn a little more about the history of the Vikings in Greenland.

The first time a European found Greenland was around the year 900. Norwegian navigator Gunnbjörn Ulfsson spotted this land by chance while trying to reach Iceland . Specifically, Ulfsson and his crew spotted some small islets that would become known as Gunnbjörn Escollos. They didn’t land on them, but they made their discovery known to the Icelandic community.

Much later, the pitfalls of Gunnbjörn served as a stopover for later Greenlandic Viking settlers. The exact location of these islets is unknown, as a volcanic eruption swept through them in the mid-15th century. Some historians suggest the position 69ºN 17ºW, while the Danish captain Graah (19th century) identified it as 65ºN 30ºW . in the 19th century. In any case, we know that they were located on the southwestern coast of Greenland.

As a tribute, the highest mountain in Greenland is called Gunnbjörn.

It would be a few decades before anyone dared to take the next step. In the year 978, Snaebjörn Galti led an expedition that attempted to settle in Greenland . However, this adventure would have ended in disaster: after spending a winter on the coast of Greenland, the members of the expedition quarreled with each other, and Snaebjörn Galti himself was killed. The only two survivors returned to Iceland.

It would take until 982 to find a new Viking expedition to Greenland. That year, Erik the Red (Erik Thorvaldsson) was temporarily banned from Iceland after being charged with murder. Faced with this circumstance, Erik decided to try his luck by sailing to the land found by Gunnbjörn . He explored the southwestern coast of Greenland for three years, then returned to Iceland, reporting that he found lands in the west suitable for settlement.

Erik the Red named the great island Greenland or Green Land . Although it is common to interpret the name “Tierra Verde” as an attractive name to appeal to settlers, we must take into account two aspects: first, that Erik arrived in the summer; second, that during that period the medieval warm period took place , a period of rising temperatures that would end around 1300. Although trees were not abundant in this region, there was enough vegetation for grazing animals.

Erik the Red’s descriptions of this unknown territory bore fruit and more than 500 Icelanders embarked on 25 ships bound for Greenland . They brought pets and all the tools needed to inhabit this region. Only 14 ships reached their destination, while the others sank during the voyage or returned to Iceland.

The first Viking settlement in Greenland was the Brattahild (“steep slope”) farm, founded on Eriksfjord (“Erik’s fjord”) in 985. 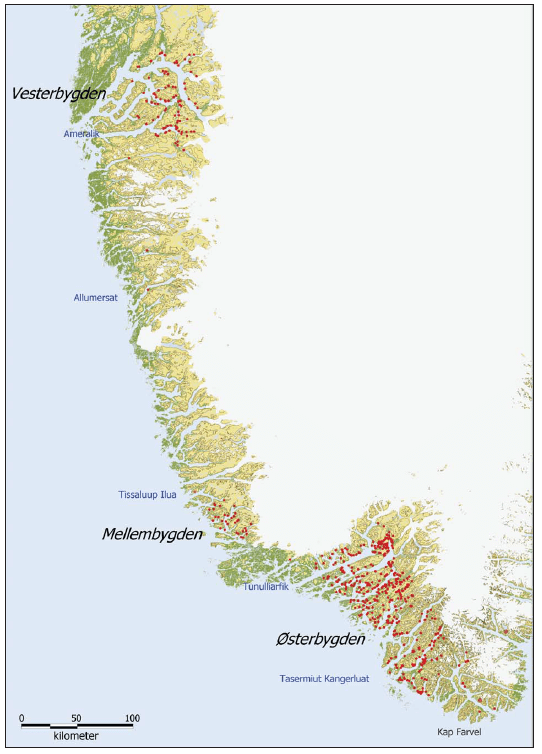 The new settlers settled near the fjords, in places similar to those of their homeland. There were two colonization areas on the island:

By adding both colonies, Greenland reached a population of between 3,000 and 5,000 Norwegians during the Viking era. Remains of churches and a monastery were found. Indeed, the Greenlandic community came to have its own bishop.

The farms were located away from the coast, in places conducive to agriculture such as the interior of the fjords. Although the Vikings also sought to raise poultry, pigs, cows or horses, the rigors of the Arctic climate only allowed them to successfully raise sheep and goats . In addition, they hunted seals, whales and native fauna such as caribou or arctic hares.

They reconstruct the face of a Viking warrior

The absence of trees made building construction difficult. In addition to importing wood from Europe, Greenland settlers also used sod (grass), stone and tusks, horns and animal bones to build their homes.

What were the Vikings looking for in Greenland?

The ambition to own a land or the pursuit of a better life are the reasons why the Vikings took the risk of colonizing an isolated and frozen land. Furthermore, we must not forget that Iceland, in turn, was an island of settlers. Exploration was deeply rooted in the culture of this Nordic people, and in fact after Greenland the Viking travels would arrive in America.

The “Green Land” presented difficult conditions for agriculture or livestock , but provided a sure source of wealth: hunting marine animals.

In fact,  the Greenlandic Vikings won a monopoly on walrus and narwhal ivory . This ivory was highly prized in Western Europe, where it was used to make jewelry and precious objects.

In addition to these materials, seal and bear skins, sheep’s wool and live specimens of gyrfalcons and polar bears were sold in Europe. In return, they imported essential resources such as wood or iron. 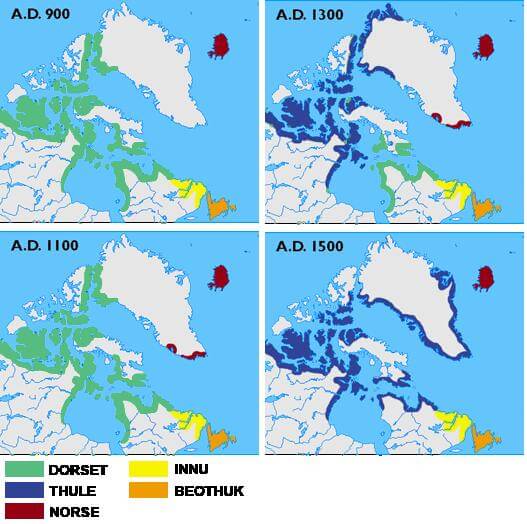 Why did Europeans leave Greenland?

If the arrival of the Vikings in Greenland is surprising, their abandonment is mysterious. After about 500 years on the island, the European settlements were suddenly lost . The Viking era was already behind us and historians consider several factors to explain the collapse of the Norse colony in Greenland.

Starting in the year 1300, the so-called Little Ice Age ended with a period of high temperatures called the medieval climate optimum (X-XIV century).

The increasingly extreme cold has affected not only vegetation and animals, making life more difficult; it also influenced sea travel through ice, isolating settlers. Remember that the Greenlanders depended on essential resources brought in from the European continent.

As the centuries passed, the houses were dug deeper and divided into smaller compartments to better conserve heat.

Agriculture and livestock have caused too great a deterioration in a barren land like Greenland. The hunting of marine animals increased in the absence of food, which reduced and frightened the populations of walruses, narwhals and seals. Famines were palpable to such an extent that settler skeletons dwindled over the centuries.

Clashes with the Eskimos

The  skrælings or Eskimos found by the Vikings in Greenland did not always lend themselves to peaceful coexistence. Eskimo objects have been found in Viking settlements, which suggests that some trade relations existed.

However, armed conflicts with these cities were frequent . We need to distinguish between two Eskimo cultures in Greenland that the Vikings knew:

No mass graves have been found proving the arrival of this epidemic on the island. However, the Black Death severely damaged the European economy by reducing its demand for walrus and narwhal ivory. In this way the profitability of the most productive economic activity of the colony collapsed.

One of the effects of the Crusades was the opening of new trade routes from Africa and Asia . Elephant ivory began to reach Europe more easily than before, causing the price of walrus and narwhal ivory to drop.

Conflicts with pirates and whalers

Another possible cause that could influence the abandonment of the colonies was the possible encounters with occasional ‘visitors’. For example, the Basque whalers and the English and Germanic pirates.

Vikings: the most difficult ending to decide according to the creator of the series

The last written record of a European settlement in Greenland dates back to the 16th century. In 1712, the Danish missionary Hans Egede arrived on the island with the intention of converting the remaining supposedly Catholic settlers to Protestantism. However, he found nothing but Inuit Eskimos.