The Vikings brought leprosy to Ireland in the 10th century, this is the conclusion of British researchers after the analysis of five skeletons found on the island and the discovery of a strain of leprosy originating in Scandinavia.

In statements collected by various British and Irish newspapers, Professor Eileen Murphy of Queen’s University in Belfast notes that “Ireland is of particular interest in the history of leprosy, as it has never been a part of the Roman world or suffered a significant occupation by successive Anglo-Americans ”. Saxon settlers’.

Two of the bodies investigated were Vikings

Three of the bodies investigated were buried in a Dublin cemetery, while the other two came from the Kildare and Antrim cemeteries. Experts from the universities of Belfast, Surrey and Southampton chemically examined Dubín’s bodies to find out where they came from . Two of them grew up in Scandinavia, while the third may have spent his early years in the British Isles. 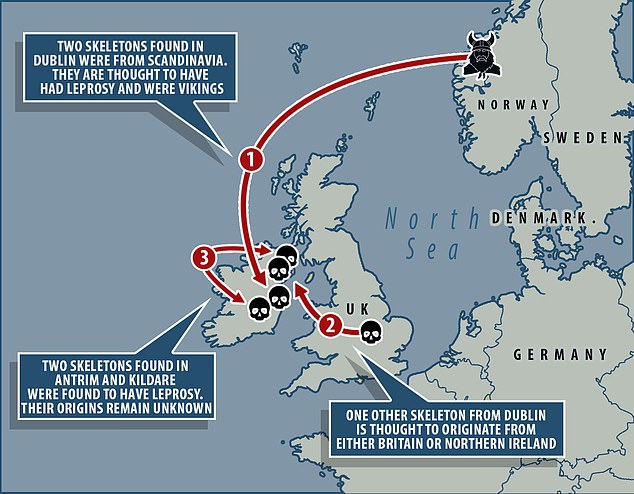 In the words of Professor Alistair Pike, an archaeological scientist at the University of Southampton: “The key to understanding the origins of these individuals were the isotopes of oxygen and strontium in their teeth. “These showed that two of the individuals came from an area that was colder and had older geology than that found in the UK or Ireland, and better matched parts of Scandinavia.”

The strains found are very similar to those found in Scandinavia

Netflix: 5 movies recommended for fans of the "Vikings" series

In addition, genetic tests known as genotyping were carried out on strains of the leprosy bacterium (M. leprae) of two of the individuals buried in Dublin, dated between the 10th and 13th centuries. The leprosy strains of these people revealed that they had been affected by two types of this same disease. One of the strains probably originated in Scandinavia, while the other developed in the Middle East. Both strains are very similar to those found in medieval cases in Scandinavian countries , which led experts to conclude that the leprosy affecting the investigated bodies came from Viking lands.