In today’s post we explain what the Viking house was like. The remains found in the excavations give us clues about its construction and the layout of its rooms. The home of the ancient Scandinavians tried to adapt to adverse climatic conditions , with long and freezing winters.

What were Viking houses made of?

The main material used to build the Viking house was wood . Other secondary materials were stone and sod, a piece of earth and grass-covered roots.

As the wood easily deteriorates over the centuries, practically nothing of the Viking houses remained above ground level. Consequently, what we know today about the dwellings of the ancient Scandinavians are interpretations of archaeological finds.

Parts of the Viking house

The most common plan of the Viking house is rectangular , of varying length and sometimes with curved walls. The width, meanwhile, usually did not exceed 5 meters. Two rows of poles supported the roof beams and ran the full length of the building. As a result, they divided the house into a central nave and two narrower aisles .

However, at the end of the Viking era another type of dwelling spread. The two rows of poles were set into the walls, creating a single space.

The difference between the houses of Viking nobles and those of ordinary people was in the size and the way they were furnished. In the town of Borg, in the Lofoten Islands (Norway), a building 83 meters long was found. Due to its great extension it can be deduced that it was the home of a Viking chieftain.

In Denmark , oak was used for house posts. Between these poles were placed wicker panels made of hazelnut and willow wood mixed with clay and manure. It is what is known as a wattle. The wealthiest members of the clan had solid wooden walls. 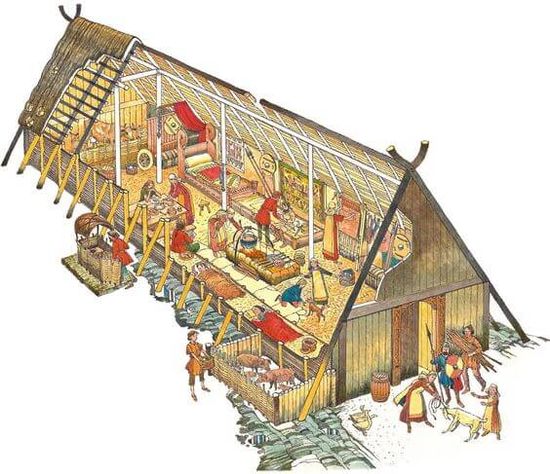 On the other hand, oaks are not abundant in the Scandinavian Peninsula. This is why softwoods of conifers have been used in Sweden and Norway . In this case, long horizontal beams were stacked on top of each other, notched at the ends to form the joints. The length of the trunks determined the length of the rooms, so that the houses consisted of several independent rooms that were built side by side to form a block.

The wooden structure, sometimes including a wooden floor (although it was usually clay), rested on a row of stones that formed a hearth . This prevented the wood from rotting in contact with the wet ground. Precisely this arrangement of stones is the only thing left of almost all Viking houses

How to grow a Viking beard?

As for the roof, it was usually made of straw, sod or wooden slats. Due to the rain and snow, the roof was gable . This arrangement, in the form of an upturned ship, also provided more interior space. 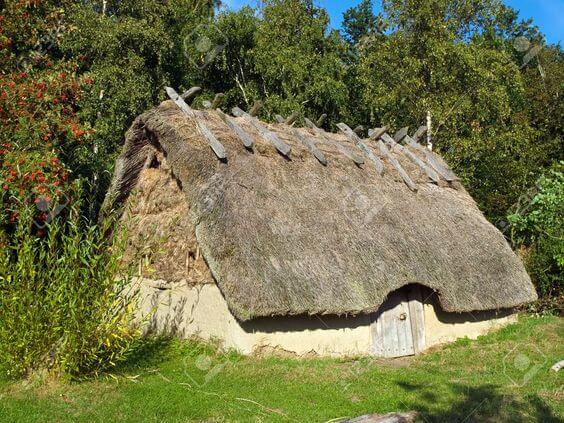 The rooms of the Viking house

As for the layout of the rooms, one end of the house was used as a barn or used as a stable for livestock. The inclusion of animals inside the house provided more warmth to its inhabitants and at the same time allowed the Viking peasants to have greater surveillance of their animals.

The space for the people had a fire in the center to provide light and heat. This fireplace was also used for cooking, although the Viking house did not have a fireplace . Instead, smoke came out of a skylight in the ceiling. The main source of light was the central fireplace, although there could also be a pair of windows.

As recent research suggests, the layout of these houses with poor ventilation and the permanently lit fire exposed the Vikings to a high level of contamination. In the long run, smoking caused several health problems, especially for women, who spent more time indoors.

Wicker-reinforced terra cotta benches ran along the inside walls of the house. They were used for both sitting and lying down, and daily tasks such as weaving or making baskets were practiced in them.

The doors of the houses were made of wood and could be locked with a key. In fact, the symbol of the free woman was the bunch of keys to her house. In Viking society, the woman was the mistress of the house or husfreya , and was in charge of running the house.

Replica of a Viking house

The home of the Vikings in the city

The houses that were located within the city walls had no space to store grain or keep livestock. As a result, they were smaller than the Vikings’ rural houses.

In Hedeby, Denmark, the foundations and lower parts of the walls of some wooden buildings have been preserved. The houses were rectangular, about 12 meters long by 5 meters wide. The wooden pillars were supported on the outside by inclined uprights. The set had a wattle lining.

These houses had one large room, which housed the house, and two small ones, one at each end, as a work space and to store the handicrafts of their inhabitants.